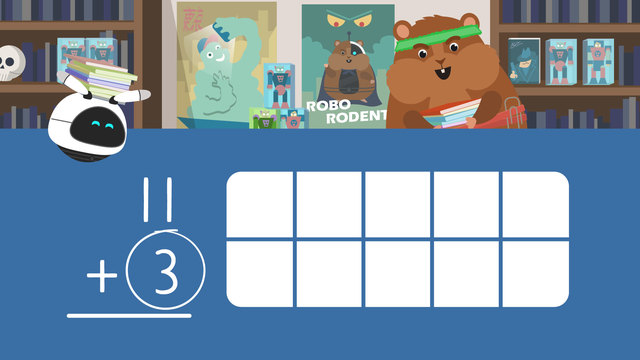 Mr. Squeaks and Imani are at the comic store adding to their collections. They are huge fans of The Adventures of RoboRodent, a crime fighting critter who’s part machine and part animal. They both add a one digit number of comics to add to the two digits stashes they already have. In this video on adding a 1 digit number to a 2 digit number, Mr. Squeaks and Imani learn how to find the total number of comics they have after checking out.

Let’s learn more about adding numbers with different digits together and an easy strategy to use for solving these equations!

What Is a 1 Digit Number?

What Is the Two-Digit Number?

There are many ways to add a one digit number to a two digit number, but here we will use a ten frame! Let's use the equation eleven plus three as an example.

First, circle the one digit number, three. Then, fill in the ten frame with three counters.

Next, start counting-on from the two digit number, eleven, and stop when you reach the last counter which would be fourteen.

Fourteen is the answer so we write that in the sum position at the end of the equation.

Have you practiced yet?

Would you like to apply the knowledge you’ve learned? You can review and practice it with the tasks for the video Adding a 1-Digit Number to a 2-Digit Number.
More videos for the topic Multi-Digit Addition

Make a Number Line to Add