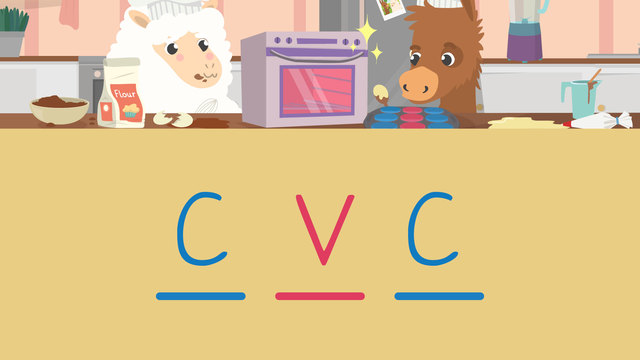 Basics on the topic CVC Words

In this Video on Three-Phoneme (Consonant-Vowel-Consonant, or CVC) Words

Dee and Kala just got their first CVC Make Oven! This oven takes three letters and bakes them into words, if you can follow the recipe exactly. In the first muffin cup, you put your consonant, in the second cup you add the vowel and in the last one you put the final consonant. Place it in the oven and voila! Out comes your fully baked CVC word! In this cvc sounds video, Dee and Kala try out their new oven with several different examples of three phoneme words.

What Are CVC Words?

Let’s learn more about three phoneme words and how to sound out cvc words with the following explanation.

CVC words are special words made up of three letters that follow the same pattern each time: a consonant, a vowel, and a consonant.

Consonants and vowels are the names for the two types of letters in the alphabet. Vowels are the letters a, e, i, o, and u. Consonants are all the other letters that are not vowels. In these words, the cvc beginning and ending sounds are very important. So are the middle vowel sounds. Vowels in CVC words always make a short sound because they're being hugged by the last consonant.

CVC words are very important because they are often the first words that help us learn to read, write, and spell.

How to Teach CVC Words?

To make the CVC word, first, say the word aloud using the image to help: sun. This helps us identify sounds in spoken cvc words.

A CVC word is a special word that is made up of three letters following the pattern: consonant-vowel-consonant. Here the vowel always makes a short sound. To make a CVC word:

Have you practiced yet? On this website, you can also find cvc sounds worksheets and exercises.