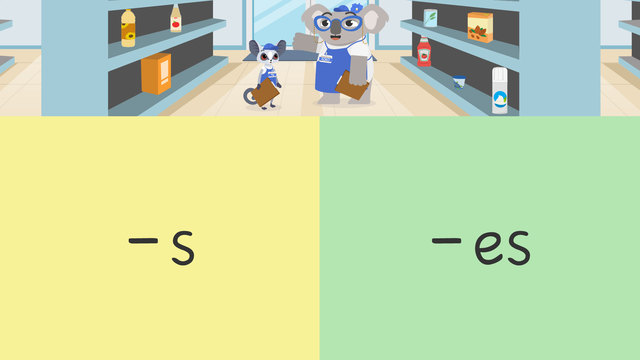 Basics on the topic Adding Suffixes to Base Words (-s, -es)

In This Video on Suffixes

Koko and Pip do a stock check, and realize they only have one item of everything! They want to purchase more, but will need to update their store signs so customers know they have multiple of each item. In the end, all their new stock comes, but unfortunately, an unsuspecting customer is in for a surprise!

Adding Suffixes to Base Words

Let’s look at the different rules for the suffix -s and -es.

Rule 2: When a word ends with O, add -s. For example, piano ends in o, so add the -s suffix to make the word pianos.

However, some words don’t follow this rule, such as tomato and tornado, which both have -es added to become tomatoes and tornadoes.

Rule 4: When a word ends with fe or f, replace the fe or f with a v, then add -es. For example, wife ends in fe, so replace that with a v, and add -es, to make the word wives.

However, some words don’t follow that rule, such as chief and belief, where you add the -s suffix to make chiefs and beliefs.

Adding Suffixes to Base Words Summary

The suffixes -s and -es change words from singular to plural. There are five rules to follow that will help you know when and how to use the -ed suffix!

There is an adding suffixes to base words worksheet below for more practice.

More videos for the topic Suffixes

Adding Suffixes to Base Words (-ed)