What Do I Need Media for? 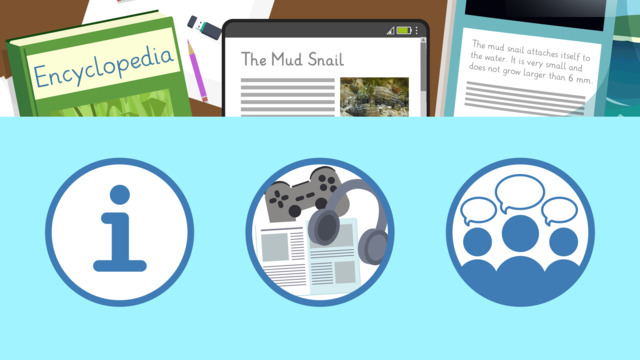 Basics on the topic What Do I Need Media for?

Do you know what you need media for?

Of course you can use media to play games or listen to music, but there is so much more to it! Watch this video to find out what else you do with media!

Transcript What Do I Need Media for?

What Do I need Media For? Karla is watching a video about the fastest snail in the world.
It's said that the mud snail can travel over FOUR miles per hour.

Wondering if that's true? We can use media to find out! Imagine you are preparing a paper on the mud snail.
Where would you look for information? Karla went to the library and borrowed an encyclopedia about snails. She also searches the Internet for pictures and texts about mud snails. Look, here is a website about mudflats, or muddy tidal areas.

It says that the snail can hold on to the water surface. At high tide, it surfs for miles like this. In an animal magazine it says that the mud snail is only so fast because it attaches itself to the water. There you can also read that it is a very small snail. It does not grow larger than six millimeters. See, it pays to research a topic in different media. But always ask yourself: Where did this information come from? Determine: who wrote the text, published the photo or put the video online? We also call this "source research" since not everyone is a snail expert. For example, this website says that mud snails can grow as big as whales. However, let's scroll down to the bottom of the page and look at the fine print where it says who published the website. This isn't true! The website is run by Joe King. He makes jokes. So Karla better not use this source for the paper! Media is important because it gives us information. We need media to inform us. What else do we need media for? For example, when we try out a new game, solve a puzzle in a magazine, or listen to music, then media is entertainment to us. That is why you hear media are also called entertainment media. You can use it in your free time. However, try not to hole up in your room all day and forget everything around you. Be sure to schedule set media times. But the media also has a third, very important role, and that is to shape public opinion. If you have access to different media, you can also form YOUR own opinion. Listening to different opinions is important when forming YOUR own opinion. Since media is used for: information, entertainment, and shaping public opinion, criticism of the media is particularly important.
What does that mean? It means you should look at different media and compare. Don't believe everything you see or read IMMEDIATELY. Question it if something seems strange to you. Always pay attention to who published or shared the information and how other media outlets are reporting on the issue. Then you'll become a real media professional!

2 comments
More videos for the topic What is Media?

What Do I Need Media for?