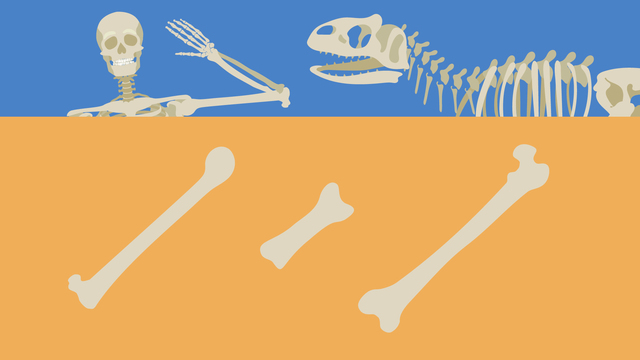 Basics on the topic The Skeletal System

In this video, you will learn something about our skeletal system.
Do you know how many bones a human body has? Watch this video to find out!

Hello! There's no need to be scared. Haven't you ever seen a skeleton before? All vertebrates, or animals with a spine, have a skeleton, for example dinosaurs, dogs, snakes, and many more! In this video we will look at "The Human Skeletal System". Our skeleton consists of two-hundred six bones. Let's look at a few of our bones. This bone here, is an upper arm bone. Here is a finger bone, and this is a thigh bone. All our bones together form our skeleton. Where two bones meet is called a JOINT. A joint is a connection that holds together bones while providing support and allowing movement where it is needed. THIS is our spine. Our spine is made up of twenty-four moving vertebrae, or small bones. In between each vertebrae there are facet joints, which link them together and give them the flexibility to move against each other. Let's try it! Bend over and try turning your upper body. The skeleton is very useful. We actually need it to stand upright because the skeleton supports us on the inside, without bones our body would be quite wobbly! We call this the support function of the skeleton. In addition, our skeleton also protects us. Our skull protects our brain from getting injured.

Here, we have the rib cage. It is made up of twenty-four individual ribs that surround our heart and lungs to protect them!

Therefore, we can also say the skeleton has a protective function. Can you touch your ribs or skull? Go ahead, try it!

Our bones also store nutrients, like calcium! Inside a bone there is soft bone marrow. The bone marrow produces red and white blood cells along with other ingredients for our blood. So without bones, we have no blood! Bones can grow and make new bone cells! These cells can be used to heal a bone if you break it. But healing takes time! After a few weeks, the break is cured and the bone is as good as new.

Let's review what you have learned today. All our bones together form our skeleton. A joint is found where two bones meet, providing support and allowing movement where it is needed. The spine is made up of twenty-four moving vertebrae that support us and help us move at the same time. The entire skeleton has a support function, which helps us stand upright. The protective function means that bones, such as the skull or the ribcage, protect sensitive organs like the lungs and heart. Bones also serve as storage for important nutrients and produce components that we need for our blood. And if we break a bone, it can even heal itself! Our skeleton is just great!

Would you like to apply the knowledge you’ve learned? You can review and practice it with the tasks for the video The Skeletal System.
More videos for the topic The Human Body

How to Keep Our Bodies Fit!

My Body: Heart and Blood Circulation

How Do We Move? (Joints, Muscles, Tendons)

My Body - Breathing and Oxygen Cycles