Writing and Evaluating Expressions with Exponents 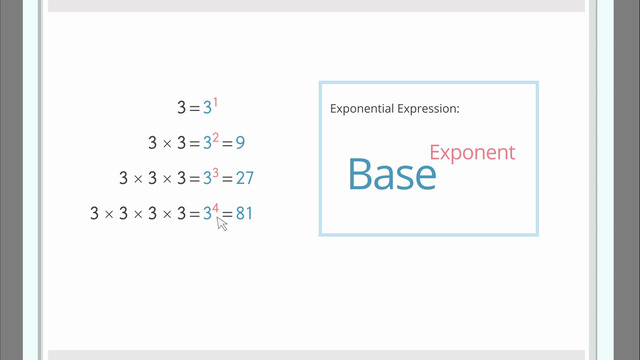 Information about the video Writing and Evaluating Expressions with Exponents

A number which is multiplied by itself several times can be written as an expression with an exponent. An expression with an exponent has a base and an exponent. The base is the number which is being multiplied by itself several times while the exponent indicates the number of times the base is being multiplied. Learn more how to write and evaluate expressions with exponents by helping Leelee figure out the time it takes to make her video viral. Common Core Reference: CCSS.MATH.CONTENT.6.EE.A.1

Ever since she was a little girl, Leelee's wanted to be famous, but now that she’s a teenager, she realizes that she’s not especially good at anything. Poor Leelee, she realizes she may have an impossible dream, but one day, by complete accident, she made the most amazing video. Really, it's amazing! Leelee thinks that this video is her ticket to stardom and wonders, how long will it take until the video will go viral? Let’s help Leelee figure it out by using expressions with exponents. Leelee has a plan, as soon as her amazing video uploads, she'll send it to three friends and ask each friend to send it to three friends, and then ask each of those friends to send it to three of their friends, and so on, and so on. The video is really short, so Leelee figures that it should only take a minute for each of her three friends to watch the amazing video and then share it with three of their friends, and so on, and so on. Let’s write this information in a chart. After the first minute, her three friends will have watched the video, so that makes three views. After they each share it with three friends, that'll be another nine views. And, when those friends each share it with three more, that'll be another 27 views. Oh boy! By minute four, those 27 friends will each share with three of their friends, so that’s another 81 more views. Do you see a pattern? The number of views grows exponentially, so we can write each of these expressions using a base and an exponent. Let's take a look: 3 is equal to 31. 3 times 3 is the same as 3 squared, which we all know is 9, and 3 times 3 times 3 is equal to 3 cubed or 27, and so on, and so on. For each of these exponent expressions, the base, the number we multiply, remains the same. But the exponent, the number of times we multiply the base with itself, increases by one each time. What’s really neat is you can use this pattern to write an expression to calculate how many new views there will be any given minute. We can write this as 3 raised to the 'x' power, with ‘x’ representing the given minute. Leelee is impatient. She wants to be super famous ASAP. But what if she shares the video with five people, and they each share it with five people, and so on, and so on. At minute 10, how many new views will there be? If we multiply 5 by itself 10 times, that's the same as 5 raised to the 10th power! Calculating this out, there will be 9,765,625 people watching her video at minute 10. WOW! Leelee is really psyched! The video has finally finished uploading! She's gonna watch it so that she can be the very first viewer of this soon-to-be-famous video. Soooo cool! Just like Leelee predicted, the video went viral, and the fly is really famous, but Leelee - not so much.

Writing and Evaluating Expressions with Addition and Subtraction

Writing and Evaluating Expressions with Exponents

Writing and Evaluating Expressions with Multiplication and Division