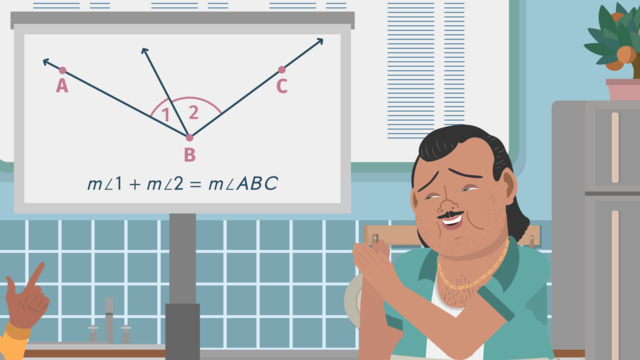 Basics on the topic What are Supplementary and Complementary Angles?

After this lesson you will be able to find pairs of complementary and supplementary angles.

Learn how to identify supplementary and complementary angles by helping Pete, the owner of Pete’s Pizza Paradise, develop a better slicing and pricing strategy!

Before watching this video, you should already be familiar with right angles, the measuring an angle, and the terms ray and vertex that are used used to describe an angle.

After watching this video, you will be prepared to find angles through extensive problem solving.

Transcript What are Supplementary and Complementary Angles?

Pete is passionate about pizza pie! His thin crust, fresh mozzarella, and secret spicy tomato sauce drive his customers wild but Pete needs a better slicing and pricing strategy. So he calls in Caroline the Consultant. She'll know how to get Pete straightened out. Caroline's an expert in precise geometric work, and she'll explain to Pete what supplementary and complementary angles are. That'll help Pete slice and price to perfection. Pete explains his current system to Caroline, where people choose their own slices and are charged 5 cents per degree of the angles. Usually people choose two slices, and then Pete measures the angle of each slice. For example, this slice measures 60 degrees, and this slice measures 70 degrees. After adding them together to get 130 degrees, he charges 5 cents per degree. Caroline jumps in and shows Pete a shortcut. He can put the two slices together, so that the two angles are ADJACENT. Adjacent angles are angles that share a common point, and a common ray. In everyday terms, that means they are next to each other. Then he just has to measure the resulting single angle, which gives us the same result: 130 degrees. A hundred thirty degrees, times 5 cents, means these slices will cost six fifty. Adjacent angles will make Pete's work a lot easier! Let's examine a little more closely how adjacent angles work. Adjacent angles share a VERTEX and one side, but they DON'T overlap. Angle 1 and angle 2 are adjacent. Their sum is the same as the measure of the entire angle ABC. Pete is super grateful for Caroline's advice, but Caroline has an idea that will allow Pete to simplify his calculations even more, so he can focus fully on his passion: Pizza! She thinks Pete should slice his pizza so that the two slices always add up to either 180 degrees or 90 degrees. But why did she choose those numbers and not something like 70 or 170 degrees? Let's look at what happens if we cut a pizza in half. We can call this a STRAIGHT angle, and it's measure is 180 degrees! Now we can slice this half-pizza any way we want, and the two angles will add to 180 degrees. Any two angles which add to 180 degrees are called supplementary angles Here, angle 1 and angle 2 are supplementary. How much do two supplementary slices cost? 180 degrees, times 5 cents, gives us 9 dollars. Now let's see what happens when we cut a half a pizza in half again. Then we get quarters, and each quarter is 90 degrees. That's why she chose 90! Now we can slice the quarters however we want and the resulting angles will add to 90 degrees. Two angles which add to 90 degrees are called complementary angles. Here, angle 3 and angle 4 are complementary. And how much do two complementary slices cost? 90 degrees times 5 cents gives us four fifty. If Pete slices his pizza into supplementary and complementary pairs he won't have to measure any more angles to get the prices! Pete quickly slices his pies. But be careful Pete, don't mix them all up! Oh for Pete's sake! All right, well let's measure and match the supplementary and complementary pairs correctly. This slice measures 117 degrees and this one measures 63 degrees. Are they supplementary, complementary or neither? One seventeen and 63 is 180 degrees! They are supplementary angles! To check, we place the two slices ADJACENTand see that they form a STRAIGHT angle of 180 degrees. Ok, how about these two? This one measures 100 degrees, while this one measures 54 degrees. Adding them together gives us 154 degrees, which means they are neither supplementary nor complementary. And when we place them ADJACENT to each other, we can see that even more clearly. And what about these two slices? This one's 20 degrees and this one's 70 degrees. Together, they add up to 90 degrees! That means they are complementary angles! Placed adjacent, they form a RIGHT angle. That scrumptious pair will cost four fifty. Pete keeps his supplementary and complementary pairs together, waiting for a lucky customer to purchase them. While the pizza is bubbling in the oven, let's review what Pete learned. Supplementary angles add to 180 degrees. When adjacent to each other, they form a STRAIGHT angle. Complementary angles sum to 90 degrees. When adjacent, they form a RIGHT angle. Ok, the pizza is ready! Let's have a toast to delicious pizza pairs! Ah, Caroline and Pete COMPLEMENT each other nicely! But Caroline is a little miffed! Remember Pete, NEVER slice through the pepperonis!

More videos for the topic Measuring and Constructing Angles