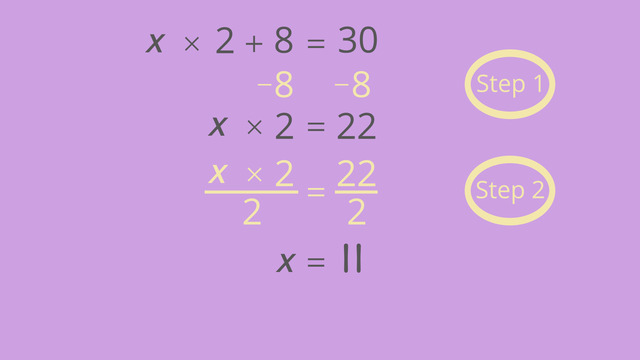 Shannon is at a concert watching her favorite band play. Of course, she wants to snag some photos and videos during the concert.

An example problem for two-step equations

Oh no! Her battery is low!!! Shannon has to save as much battery as possible. She knows that her favorite song is playing at the end of the concert, and she wants to film it, no matter what.

Taking the video of the last song will cost her 8% of her remaining 30% battery life. Every photo taken will cost Shannon an additional 2%.

So, how many photos can Shannon take during the concert, with having enough battery left for the video of the last song? We can solve this using an equation.

The battery must last long enough to take one video and some photos. Since you are trying to find out how many photos Shannon can take, let x represent the number of photos taken during the concert.

Now we have the equation x · 2 + 8 = 30. Let's solve this equation for x to find out how many photos Shannon can take during the concert.

Equations like this can be solved in two steps. Your first step is to simplify by addition or subtraction. Because 8 is added in the problem, you need to use the inverse operation, subtraction, to solve.

The second step is to isolate the variable by multiplication or division. In the problem, x is being multiplied by two. The inverse of multiplication is division, so you should divide both sides of the equation by 2.

We can solve all equations that look like this one using just two steps:

It would be a pity if she couldn't record this awesome song! Oh no! It can't be true! She's out of storage space on her phone!

Would you like to practice what you’ve just learned? Practice problems for this video Solving Two-Step Equations help you practice and recap your knowledge.
More videos in Equations