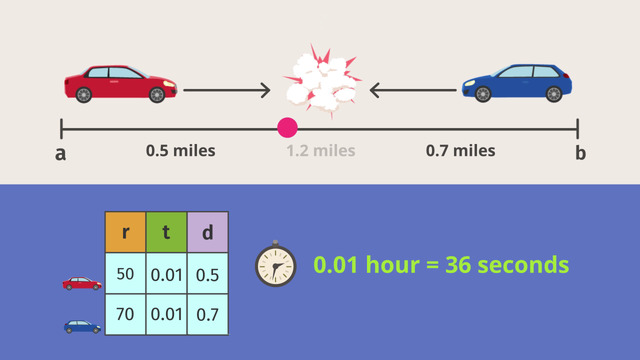 A boat departs from London and travels at a certain speed, and another boat leaves from Amsterdam. The two boats travel on the same path but in the opposite direction… Does this problem make you seasick? Don’t worry, it’s a distance-rate-time problem with travel from different directions.

Distance, rate, and time problems when travel is from different directions won't be complicated as long as you stay organized, set up a table and enter all the information you know, and use variables to represent the unknown values. Be careful when using different units of time. You cannot calculate minutes and hours in the same problem, so before calculating the distance, rate, or time, convert minutes to hours or hours to minutes.

To learn more about how to calculate the distance, rate, or time of travel from different directions, watch this video and see how Johnny Crash uses the DRT formulas to solve his problems.

Tim Carcrashian, true to his name, works for a vehicle crash testing company. His job is to set up the slow-motion-camera used to document car crashes. The set-up of the camera is very expensive and time-consuming. To do the job just right, Tim needs to know exactly when and where the cars will crash. How can we help him?

Exactly where and when will the cars crash? Let’s figure out how to solve this problem. Distance is equal to rate times time. This pyramid can help us remember the formula. A shorter, more common, way to say this d = rt.

Ok, let's get started...It's a good idea to use a table to organize the data. First, let's fill in the values with what we already know, the rate for each car. We don’t know the value for time yet, just that it's the same for both cars, so for now, we can represent this with the variable, 't'. We can write two equations to describe what's going on here: d = 50t. And...d = 70t.

Let's write that information into the table. Since we know the total distance the two cars will a travel together is 1.2 miles, we can set up an equation and solve for the unknown time. 1.2 = 50t + 70t. Evaluating this we get: t = 1/100 of an hour. Let's fill in the table... Now, we can use the value we just calculated for the time to determine the actual distances both cars will drive before crashing and fill in the table.

This is just great! Tim is so happy! Using the distance-rate-time formula, coming from different directions, now, Tim knows Car 1 will drive exactly 1/2 of a mile and Car 2 will drive 7/10 of a mile, then crash, bang, boom! As a bonus, Tim also knows exactly when this will happen. The cars will crash after 36 seconds, which is equal to 1/100 of an hour. He sets up the Slow-Motion-Camera Unit just right. He’s so good at his job, maybe he'll get a promotion and a big raise!

The right side will be only 4/10 of a mile long. Tim doesn't want to change the set-up of the camera. What can he do so the cars will still crash at the same place and time? He can't change the distance or the time, but he can change the speed of Car 2. Let's calculate the new rate using the distance-rate time formula.

Another week goes by... Tim gets an email... The track improvements are all done, and the new plan is to crash test one of the cars driving at a very high speed. Car 2 will be tested driving 90 miles per hour. Tim doesn't have time to change the camera. What should he do? He can't change the speed or the time, but he can change the distance Car 2 will drive.

Let's summarize: The distance-rate-time pyramid is a handy graphic organizer to help you remember and understand how to solve these kind of problems. t = d/r, r = d/t, d = rt. After all his hard work, Tim can finally watch the crash test. Oh no, that's not test Car 2...That looks a lot like Tim's boss' car...

Would you like to apply the knowledge you’ve learned? You can review and practice it with the tasks for the video Distance - Rate - Time – Different Directions.
More videos for the topic Equations