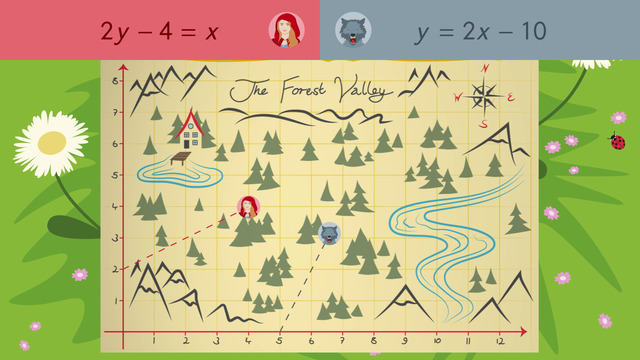 Information about the video Solving Systems of Equations by Graphing

A system of equation is two or more equations with the same variables. To determine the point where the equations meet, the solution to the system, there are several methods: graphing, substitution, and elimination.

This video investigates how to use graphs to solve systems of equations. To determine where lines will meet on the coordinate plane (coordinate grid), manipulate each equation in the system, so it is written in slope-intercept form, y = mx + b. You can do this by isolating the y-value or the vertical coordinate.

Now using information from the equations written in slope-intercept form, you can graph the lines. Remember b is the y-intercept, and m is the slope or the rise over the run. First, mark the y-intercept, then using the slope value, you can mark a couple other points on the line and last connect the dots to draw a line. Do this for every equation in the system. The point where the lines intersect is the solution to the system and also the ordered pair that will satisfy all the equations in the solution.

How can a system of equations be useful in the real world? Well imagine you want to accidentally bump into someone, if you knew the equation of their path and the equation of your path… To learn more about this topic, watch the video.

Solve systems of equations to find solutions to problems.

Red Riding Hood and the Wolf are both walking through the forest. To figure out if and where they will meet we can solve a system of equations by graphing.

When you look at the map, you can see that it looks like a cartesian coordinate system.

You just need to move the 2 in front of the y. You can do this by dividing by 2 on both sides. This reduces to y = 1/2 x + 2. Now the equation is in slope-intercept form.

First, let's plot the y-intercept (0, 2). Now, because the slope represents rise over run, you can count up 1 and right 2 to plot the next point. You can keep counting up one and right two to plot more points.

The two paths intersect at the point (8, 6). Whether or not Red Riding Hood and the Wolf will meet depends on how fast or slow they are both walking.

The y-intercept is at (0, 3). Then we plot more points by counting up one and right two. The two lines are now parallel to each other so they will never intersect.

Now imagine the Wolf walked along the line y = 2x/4 + 4/2. Where will they meet? Let's draw the graph. The y-intercept is at (0, 2). To plot more points we count up 2 and right 4. As you can see the graphs are the same, which means there are infinitely many possible meeting points.

Let's get back to our first scenario. Red Riding Hood and the Wolf are walking toward the intersection point. Red Riding Hood sees the Wolf and is shocked for a split second. Phew, it's only Jim heading to the same Halloween Party. So they decide to walk together.