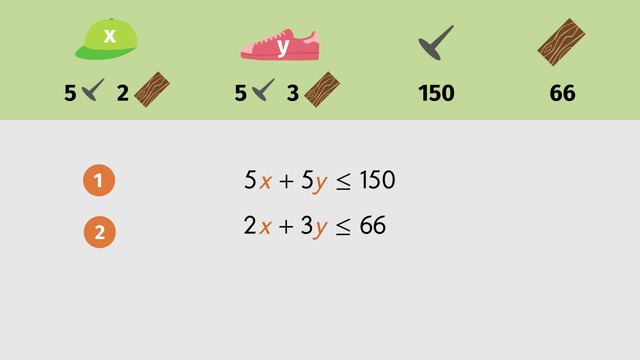 Basics on the topic Solving Systems of Inequalities

One way of finding the solution set of a system of linear inequalities in two variables is by graphing.

Use the point of origin (0,0), or another point of your choice if the origin does not work, as a test point to determine the correct half-plane that corresponds to the graph of each inequality and lightly shade in that half-plane. Finally, the solution to the system of linear inequalities is the region where all the shaded half-planes overlap.

Caleb is very proud of his collection of sneakers and baseball caps. He wants to build a shelving unit to display his treasures. In his garage, he finds 150 nails and 66 wooden planks. Can we help Caleb figure out if there will be enough materials to build the shelving unit?

Solving a system of inequalities

Graphing a system of inequalities

We can also figure out the answer to this system of inequalities problem by graphing. To make it easier to graph, let's modify the original equation to let 'x' represent the number of baseball caps and 'y' to represent the number of pairs of sneakers. Next, we need to rewrite the two inequalities in slope-intercept form. To do this, you must isolate the 'y' on the left side of the inequality sign, so subtract the x-term from both sides, and then divide both sides by the coefficient 5 to isolate 'y'. Y' is alone on the left side. Let's do the same to the other equation and the two inequalities are now written in slope-intercept form.

Although Caleb has enough supplies, he’s not a master with a hammer and, as you can see, the shelving unit looks a little bit unstable he puts the last baseball cap in the cubby, and ...oh no…

Would you like to apply the knowledge you’ve learned? You can review and practice it with the tasks for the video Solving Systems of Inequalities.
More videos for the topic Systems of Equations and Inequalities