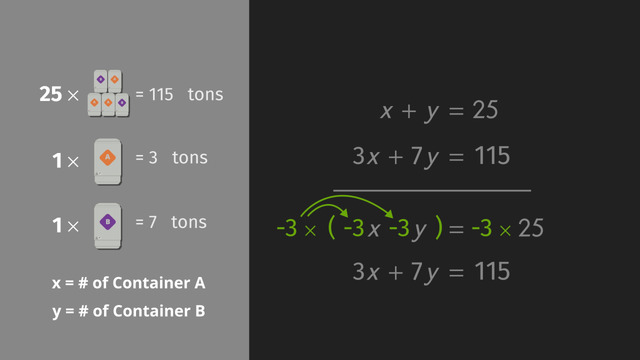 Information about the video Solving Systems of Equations by Elimination

A system of equations, also called simultaneous equations, is two or more equations with the same variables. To determine the solution to the system, or the point where the equations intersect, there are several methods: graphing, substitution, and elimination.

This video investigates how to use elimination by addition or subtraction to solve systems of linear equations. To solve by elimination, you must manipulate the system so when adding or subtracting the equations, one of the variables will cancel out, and then you can solve for the remaining variable. After the solution for one variable is calculated, just plug the known value into one of the equations to solve for the second variable. Follow the steps you have learned to isolate the second variable by using inverse operations. Don’t forget, whatever you do to one side of the equal sign you must do to the other.

Also, remember to always check your work by plugging in the values for the variables and making sure the solutions are valid. You would hate to miss the problem because you made a careless error and complicated problems such as these have lots of room for error. There are many real world uses for solving systems of equations such as figuring out how many cupcakes and how many cookies were sold at a soccer team’s bake sale - if a certain amount of money was collected. Anytime you have a problem with the same unknowns, setting up a system of equations may be the best way to solve your problem. To learn more, watch this video.

Solve systems of equations to find solutions to problems.

Far, far away, in a distant universe, in the System of Equations, on a previously unexplored planet called Elimination, a brave, but mathematically-challenged shuttle crew has been tasked with bringing home samples from the planet.

In order to return to Earth safely, the filled containers must not have a total mass of more than one hundred fifteen tons. How many containers of each sample can be transported on the space shuttle? Let's help the crew figure out this problem!

Translating a Word Problem into a System of Equations

Since an error in the calculation could mean a major disaster for the space travelers, let’s go over the information one more time.

Now let’s manipulate one or both of the equations as needed. We can use addition or subtraction to eliminate one of the variables.

Hmm, how can we eliminate one of the variables? How about we multiply the first equation, x + y = 25, by negative three? We distribute −3 to each term.

Solving a System of Equations for the Unknowns

Now, solve for y. We can divide both sides by 4 and see that y is equal to 10. Next, substitute 'y = 10' into one of the original equations, so you can solve for x.

We can use either of the original equations and our answer will be the same; let's save time and pick the least complicated equation.

Hold on! What’s happening? They can’t start ! There's a stowaway! (No problem, they can activate a specially designed wiper, designed especially for an emergency such as this. Watch how that stowaway will be wiped away!)