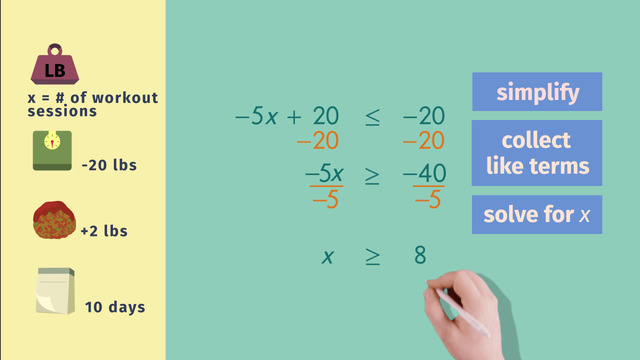 First, if parentheses are used in the problem, simplify those terms. Use the Distributive Property if needed. Next step, collect the like terms by adding and subtracting. After that, solve for the variable using opposite operations. This all seems the same – but watch out. The difference is the inequality sign. Your last step in solving the problem is to attend to the inequality sign.

Don’t forget to check your work. It’s always important to check your work but especially when there are many steps because the more work you do – the greater the chance of making a careless error. To learn more about multi-step inequalities and how and when to flip the symbol, press play to start this video.

Rocky is watching television while eating his favorite food, meatballs, when suddenly...This could be the perfect opportunity for Rocky's great comeback. To figure out how he can get back into shape, we can use solving multi-step inequalities. He remembers the good 'ol days when he was fit and won the beauty contest. He has to get in shape in ten days. This requires a call to his former coach.

Rocky won competitions at a weight of 50 pounds. He knows from his old workout schedule that he loses five pounds during a workout session. He has gained a lot of weight and now weighs seventy pounds. Therefore, he has to lose twenty pounds in ten days to reach his former weight. But, he loves his meatballs and has to eat meatballs daily, so he still gains two pounds a day in meatball weight.

We want to know the minimum number of workout sessions Rocky needs to lose twenty or more pounds. Let's look at the facts: he loses five pounds each session. Let's let x stand for the number of workout sessions. Rocky gains two pounds a day for 10 days. In the end, he wants to lose 20 or more pounds. So we put an equal to or less than sign in between.

Be careful: The inequality sign is reversed each time we divide by a negative number. The result is X is greater than or equal to eight. So, he starts training. Now that Rocky has had eight training sessions, let's check on his progress. Substitute X in the equation with the number eight. Simplify the left side of the inequality by multiplying.

As you can see, we get a true statement again, so if Rocky trains for more than 8 sessions, he will also reach his goal. Woohoo! Rocky won the competition! Let's have a look at his prize. His prize is meatballs for a lifetime. Poor Rocky, will he ever win another competition? Luckily, he still has his coach.

Would you like to practice what you’ve just learned? Practice problems for this video Solving Multi-Step Inequalities help you practice and recap your knowledge.
More videos in Inequalities