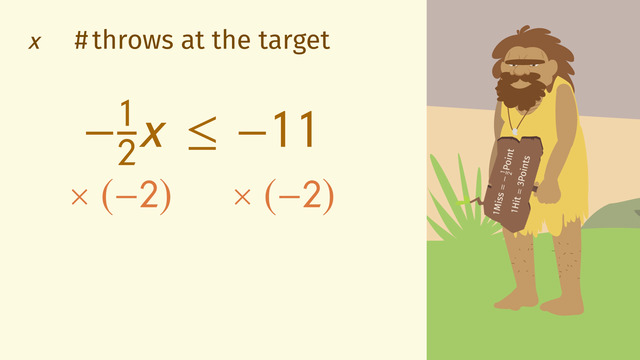 For simple inequalities such as x < 5, we know all the values less than 5 are in the solution set. But, what if there is a coefficient to the variable such as with this inequality: 2x > 10. This is a one-step inequality problem, and we can solve this type of inequality problem by using the inverse of multiplication or division.

It’s a good idea to check you work, to catch any careless errors you might make such as forgetting to flip the inequality sign. When graphing on the number line, an open dot is for greater than (>) and less than (<) and a closed dot represents inequalities of more than and equal to (≥) and less than and equal to (≤). To learn more about one-step inequalities by multiplying or dividing, watch this video. You will flip over our characters.

To learn how to solve one-step inequalities with multiplication and division, let’s go back in time.

Look! Two cavemen are eating dinner. Seems like they're just about finished! Look at all those bones!

One of the cavemen picks up a bone and throws it. He hits a rock. What fun! The cavemen decide to make a game of it and throw the bones for points. First, they agree on the rules.

Each hit on the bullseye is worth 3 points and a loss of half of a point for each miss. This caveman has 12 Points. Since we don't know the number of times he hit the bullseye, we'll let the variable x represent this quantity.

Each time the cavemen hit the bullseye is worth 3 points. If there were no misses, 3x would equal 12. But since we know that every miss costs the cavement precious points. So it's possible that the cavemen missed the target on a few throws.

To solve the inequality, divide each side by 3: x ≥ 4. To have a score of 12, the caveman could have hit the bullseye 4 or more times.

Here's the second contender. Oh man! The second caveman's score is minus 11 points.

If the second caveman didn't hit the target a single time, negative 1/2 x would equal minus 11, where x is the number of throws. But his total number of throws might be higher if he was successful at hitting the target on occassion. So, −1/2 · x ≤ −11.

Since you are multiplying or dividing by a negative number, don’t forget you have to flip the inequality sign.

x is greater than or equal to 22. He could have made 22 or more attempts! This caveman is a persistent fellow! He should get extra credit for effort!

But when we multiply or divide with a negative number, why do we flip the inequality? To flip or not to flip, that is the question.

2 < −5? That’s not right. But, if we flip the sign, like we were supposed to, then we get a true inequality. So remember:

When you multiply or divide an inequality by a negative number, you must flip the inequality sign.

There they go again! They're really persistent! Hooray, he got one! He hit the bullseye! Oh no! That's not a rock! Run cavemen! Run!

Would you like to apply the knowledge you’ve learned? You can review and practice it with the tasks for the video Solving One-Step Inequalities by Multiplying or Dividing.
More videos for the topic Inequalities