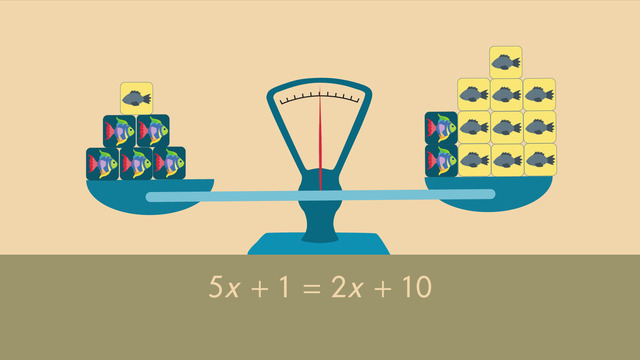 There are many steps to solve multi-step equations, hence the name. Step 1, if parentheses are shown in the equation, you may need to use the Distributive Property to simplify. Step 2, combine like terms on each side of the equal sign.

Like terms can be constants, variables alone, or variables with coefficients. Constants are numbers alone such as 3 or 1.5. Coefficients are numbers that are attached to a variable as a result of multiplication or division such as 2x or x/4.

Step 3, use the inverse operations (opposite operations) of addition or subtraction to move constants to one side of the equal sign and variables to the other. Use common sense, and do this in the most efficient manner. Next is Step 4, use inverse operations of multiplication or division to isolate the variable and calculate the answer. It’s always a good idea to check your work by substituting the solution for the variable back into the original equation and use PEMDAS to simplify.

Transcript Solving Multi-Step Equations with Variables on Both Sides

Meet Emilio and Joanna. They're at a fish store. They've come to buy some scaly friends, and they each have the same amount of money.

When Emilio sees Joanna’s purchase, he feels sad because he realizes he could have bought another Rainbow Blinkey. He wonders, to get one more Rainbow Blinkey, how many Grey Borings would he need to exchange? To find out how many, Emilio can use a multi-step equation with variables on both sides of the equal sign.

Just to refresh your memory, an equation works like a scale. And to keep the scale balanced, when you add or subtract one side of the scale, you must perform the same operation to the other side.

Grey Borings cost $1 each. We can write the expression 5x + 1 = 2x + 10 to represent this situation, where the variable x represents the cost of a Rainbow Blinkey.

To find out how many Grey Borings are equal to the cost of one Rainbow Blinkey, you need to isolate the Xs. Using inverse operations, we can modify the equation so we will have all the Xs on one side of the equal sign and all the constants on the other side: 5x + 1 = 2x + 10.

As you can see, it's important to go step-by-step when solving equations such as this. I wonder how the fish are doing. Let’s take a look.

So peaceful… Hold the fish food! What's going on? Wow, talk about fight or flight! Look at those fish move!

Solving Multi-Step Equations with Variables on Both Sides Exercise

Would you like to practice what you’ve just learned? Practice problems for this video Solving Multi-Step Equations with Variables on Both Sides help you practice and recap your knowledge.
More videos in Equations