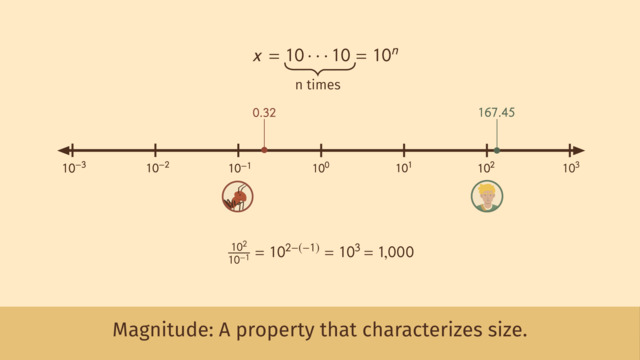 Basics on the topic Magnitude

After this lesson you will be able to understand that approximating numbers using the powers of 10 provides information about the magnitude of a number.

The lesson begins by teaching you the definition of magnitude. It leads to approximating the magnitude by finding the nearest powers of 10 bigger or smaller than the number. It concludes with comparing magnitudes by dividing powers of 10.

Learn about the concept of magnitude by helping David compare his size to the size of his ant friend, Hans!

This video includes key concepts, notation, and vocabulary such as: magnitude (a property of a number that tells us how big or small a number is); and powers of 10 (any number written as 10 multiplied by itself a certain number of times).

Before watching this video, you should already be familiar with exponential notation (including positive, negative and 0 exponents), and the laws of exponents.

After watching this video, you will be prepared to learn a more detailed and exacting process of estimating and comparing numbers.

Common Core Standard(s) in focus: 8.EE.3 A video intended for math students in the 8th grade Recommended for students who are 13-14 years

David is a young naturalist, curious about all things great and small. He marvels at how small the ant is compared to him. David feels a kinship with this little creature, and names the ant Hans. David is a lot bigger than Hans. But in order to truly compare their sizes. David will need to understand the concept of magnitude. Hans measures point three two centimeters. From Hans's perspective, David is a giant! David measures 167.45 cm. Subtracting isn't so instructive. One hundred and sixty seven point four five minus zero point three two is 167.13 cm, but that doesn't tell us much. A better question is, about how many times bigger is David compared to Hans? Instead of SUBTRACTING, we can compare the magnitudes of David and Hans. Magnitude is a property of a number that characterizes its size. How do we find the magnitude of Hans's and David's height? To get a rough approximation, we find a nearby power of 10. Remember, a power of 10 is any number which can be written as 10 multiplied by itself a certain number of times. So 1, or 10 to the 0, 10 to the 1, 10 to the -1, 10 to the 2, 10 to the negative 2, and so on are all powers of 10. Hans is point three two cm long. What is the closest power of 10 to point three two? It is 10 to the negative 1. The negative 1 exponent is an expression of Hans's magnitude. By itself, 10 to the negative one still doesn't tell us much. The interesting question for a curious naturalist is, how does David's magnitude compare to Hans's? Let's approximate David's magnitude. David is 167.45 cm tall. What is the power of 10 closest to 167.45? First let's find the closest power of 10 which is bigger than 167.45. 168 is the very next integer. 999 still has 3 digits so then, 1000 is the next power of 10! Or ten to the 3rd. We can also look to see if there is a power of 10 smaller than David's height which is even closer than 10 to the 3. The first power of 10 we find is 10 to the 2. As 10 to the 2 is closer to David's height than 10 to the 3, we will take 10 to the 2 as David's magnitude. Now let's compare the magnitude of David and Hans. We want to know how many powers of 10 bigger David is than Hans. Dividing David's magnitude by Hans's will give us the difference. David is roughly 10 to the 3, or 1000 times bigger than Hans. In general, how do we approximate and compare magnitudes? A number line can help us visualize the process. Suppose we have the number 2010 point four. First, we observe that there are integers on either side of this value. 2,010 and 2,011. Then, we find the closest power of 10 above and the closest power of 10 below these integers. Counting up from 2011 takes us to 9,999, and the next number is 10,000, or 10 to the 4th. 10,000 has four zeros, so our power of 10 is 10 to the 4th. Counting down from 2,010 takes us to 1,000, or 10 to the 3rd. In general, for ANY number 'M', we can find an integer 'N' below it and an integer 'N+1' above it. If 'N+1' has 'k' digits, 10 to the 'k' will be the nearest power of 10 bigger than 'M' and 10 to the 'k-1' will be the nearest power of 10 smaller than 'M'. A number line also helps us visualize COMPARING the magnitude of numbers. We know that David is roughly 10 to the 3, or 100 times as big as Hans the ant. But David is a curious naturalist and wonders how big the earth is compared to himself. Let's use powers of 10 to compare the magnitudes of David and the earth. Remember, David is 167.45 cm tall. The earth is a stunning one trillion two hundred seventy-four billion two hundred million cm in diameter! Let's find the magnitude of the diameter of the earth and compare it to David's magnitude. What's the closest power of 10 to David's height? As we found before, it is 10 to the two. What's the closest power of 10 to the diameter of the earth? Ten to the twelve. Dividing the earth's magnitude by David's magnitude we see that the earth is roughly 10 to the 10, or 10 billion times as big as David. David is 1,000 times bigger than Hans the ant, but the earth is 10 billion times bigger than David. Woah. Let's review. Magnitude is a property of a number that characterizes its size. We can approximate a number by finding the nearest powers of 10 bigger or smaller than the number. We can compare magnitudes by dividing the bigger power of 10 by the smaller one. The result tells us how many times as big the bigger number is compared to the smaller. Magnitude helps David comprehend how much bigger he is than Hans the ant. It also helps David comprehend how much bigger the earth is than him. There is no limit to the magnitudes we can compare in the universe.