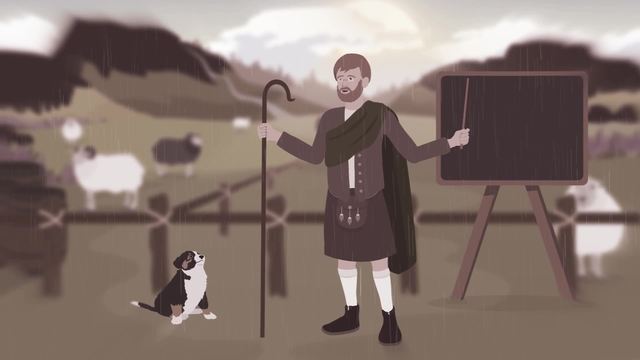 Basics on the topic Keywords for Division

Instant recognition of specific keywords is a sure technique to easily proceed with the division process. Knowing the specific parts, like the dividend, divisor, quotient, and remainder, will avoid misplacement of the given and ensure a correct computation. Other words that imply division, like ratio and average, can be additional clues when easily identified in a problem requiring division as part of the solution. See how shepherd McWIlliams taught his sheep dog McWoof to learn these keywords and to help him take care of his herd. Common Core Reference: CCSS.MATH.CONTENT.6.EE.A.2

The keywords for division

To get where he is today, McWoof had to learn all the keywords for division. Since McWoof was a puppy, Shepherd McWilliams taught him different signals for the parts of division:

To stop overgrazing, Shepherd McWilliams’ sheep have to graze on different fields. So, we need these 18 sheep to be divided into equal groups of 6 sheep each. In this situation, 18 is the dividend, or the number you are going to divide. 6 is the divisor, or the number of sheep in one group. From 18, we can make three equal groups of 6 sheep, so the quotient is 3. If there were any sheep left over after dividing, that would be the remainder. We could write this equation like this, this, or this.

No matter how you write it, the answer, or the quotient, is the same. When he’s finished, McWoof gives the shepherd a signal that the job is done and he can check to see if the groups are of equivalent sizes. He was taught that it's important to make sure all the groups are the same size, with no remainders. It looks like McWoof tried to divide the 18 sheep into equal groups with 5 sheep in each group. But after making 3 groups, each with 5 sheep, there are 3 sheep remaining; so the remainder is 3.

In addition to splitting the herd into equal groups, McWoof was also taught to keep track of the ratio of white sheep to black sheep in the herd. In this case, we have a ratio of 15 white sheep to 3 black sheep. Typically, we reduce the ratios to the simplest form, just like with fractions! This means that for every five white sheep, there is one black sheep. Ratios can be written in a couple of different ways.

McWilliams also taught McWoof to help determine the average amount of wool that comes from his different kinds of sheep. To find the average of something, you take a total sum and divide that by the number of elements you added together. For example, if the black sheep’s wool production looks like this, then the total sum of the pounds of wool, 9, is your dividend, and the number of things you summed, in this case, the number of black sheep, 3, is your divisor. Now we just divide 9 by 3 to find the average. So each time one of the black sheep is sheared, Shepherd McWilliams can expect an average of 3 lbs. of wool. Shepherd McWilliams is so proud of his herding hound, that he’d like to give him one of his favorite treats. Oh, I guess counting sheep has unintended consequences.

Would you like to apply the knowledge you’ve learned? You can review and practice it with the tasks for the video Keywords for Division.
More videos for the topic Expanding, Factoring, and Distributing Expressions