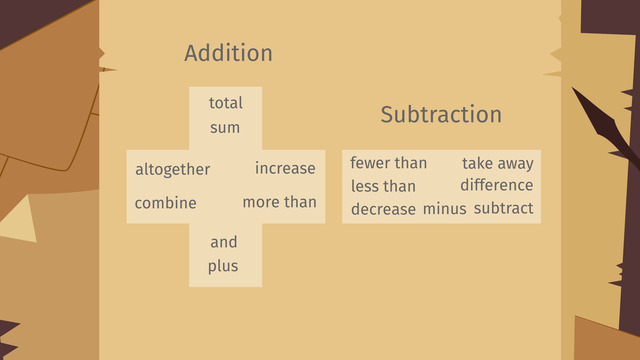 Basics on the topic Keywords for Addition and Subtraction

In order to translate word problems into mathematical expressions, it is helpful to know certain keywords to look for which indicate which mathematical operations to use. Specifically, words like sum, total, increase, add, plus are commonly used for addition, as well as words like altogether, combine, more than, all, both, and so on. The same goes for subtraction: decrease, minus, fewer, take away, difference, left, less than, subtract, remain, and so on. Learn how to recognize keywords for addition and subtraction by helping Caulleen solve a mystery at her school, the Academy of Magic. Common Core Reference: CCSS.MATH.CONTENT.6.EE.A.2

Transcript Keywords for Addition and Subtraction

At the Academy of Magic, Caulleen is hot on the trail of a breaking story for her school paper. According to rumors, the school's Switch Quitch Team has been experiencing an odd phenomenon: Brooms from the equipment room are going missing, only to mysteriously return a few hours later, as if nothing had happened! In order to crack this case, we will need to identify keywords for using addition and subtraction.

How you turn keywords into mathematical expressions

Caulleen plans to start her investiagation by interviewing the Switch Quitch coach. She needs to start with the basics: who had access to the equipment room? The coach tells her that one of the new boys on the team is in charge of equipment. But he can't remember his name. But he knows the number of boys and girls on the team altogether is equal to 20. He knows this because the total sum of players on the team was 16 last year, but increased by 4 this year. How can we turn this information into mathematical equations so we can be sure of how many players are on the team?

Keywords which are indicating Addition

When information about math operations is presented in a word problem format, look for keywords that indicate the correct operation to use. Let's start with the first fact the coach told us. The total number of boys and girls on the team is 20, altogether. The keywords 'total' and 'altogether' tell us that this is an addition problem. We don't know exactly how many boys and girls there were, but we can use the variables 'b' and 'g' to represent them. Finally, we know that the total number is 20, so that goes to the right of the equal sign. Let's move on to the second thing we learned. She told us that last year, the total sum of players on the team was 16 but increased by 4 this year. The words "total sum" and "increase" tell us that this is also an addition problem. We can use the variable 'p' to represent the players on the team. The number 16 tells us the number of players last year and 4 is the number we are increasing by.

Keywords which are indicating subtraction

Hm...very interesting, but we're going to need some more clues to solve this mystery. Caulleen decides to talk to the Switch Quitch team captain to see what she knows about the missing brooms. The captain tells Caulleen there should be 20 brooms in the supply room, but today, that amount decreased by 3. Let's convert this to an algebraic expression. By focusing on the keyword decreased, we know to use subtraction. Now we can insert the number of brooms there should be and take away the number that are missing. That's another helpful clue, but still we aren't any closer to solving the mystery. But suddenly the team captain remembers that, actually, today there wasn't just brooms missing. There was one ball fewer than there normally in the equipment closet. Even though we don't know how many balls there normally are in the equipment closet, we can write this as an algebraic expressions. The keywords "fewer than" indicate that we should be using subtraction in our expression. We can use the variable 'n' to represent the number of balls that there usually are. Since there was one fewer than the number of balls there usually are, we can write this as the expression n - 1. Two more pieces have been added to the puzzle. But what does it all mean?

Before we get back to Caulleen, remember that there are a lot of keywords that can be used to indicate addition and subtraction. For addition, Caulleen used the words total, sum, altogether, and increase. But we could also have used the words combine, plus, more than, or even just the word "and". For subtraction, Caulleen used the words, fewer than, decrease, take away, and subtract. We also could have used less than, minus, and difference. Can you think of any others?

Back to the missing brooms. As she's going over her notes, Caulleen starts to hear a strange rustling sound coming from outside. Is someone playing Switch Quitch? It looks like those missing brooms are having fun without the students of the Academy of Magic. But actually, you know what? These guys are pretty good!

Keywords for Addition and Subtraction exercise

Would you like to apply the knowledge you’ve learned? You can review and practice it with the tasks for the video Keywords for Addition and Subtraction.
More videos for the topic Expanding, Factoring, and Distributing Expressions