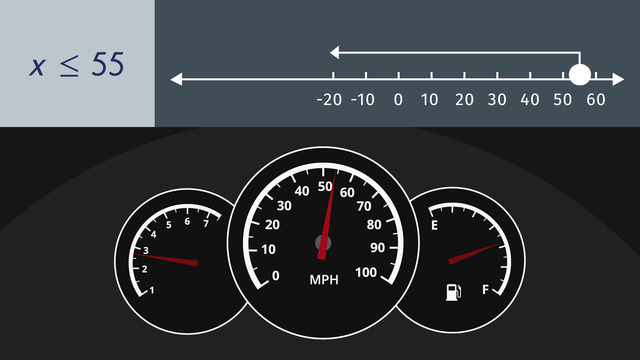 Basics on the topic Inequalities and Their Graphs

How do you know which is which? Pay attention the direction of the inequality symbol, it always points to the value that is less than and keep an eye out for a line under the more than or less than symbol, that tells us the value can also be equal to.

Why do we learn about inequalities? Of course, we need to know about this topic to get a good grade in math but also for real world use. A speed limit of 55 mph means you must drive less than or equal to 55 mph. Watch this video to find out what happens when Timmy drives too fast.

Transcript Inequalities and Their Graphs

This is Timmy. Timmy is the best man at his friend's wedding, but he is running super late. The road he's driving on has a speed limit of 55 miles per hour, which means he should not drive more than 55 miles per hour. This can be represented by an inequality.

However, Timmy could also drive at exactly 55 mph, which is the posted speed. The inequality representing speeds 55mph and under is: x is less than or equal to 55mph. We can show this on the number line by using a closed circle at 55 mph instead of an open one, along with the arrow to the left that represents all speeds less than 55mph. Our graph represents the speeds Timmy could drive.

And remember: we use a closed circle because 55mph is included in the inequality, since Timmy could drive at exactly 55mph.

Timmy really has to hurry because he's got the wedding cake! Could he go faster than 55mph? Not without breaking the law and risking getting a speeding ticket for driving too fast. We can represent speeds that are faster than 55mph with the inequality x > 55.

The graph of this inequality has an open circle at 55mph and arrow to the right. This graph shows the speeds that would earn Timmy a speeding ticket, since all of them are faster than the posted speed limit.

Now that we understand the main idea of inequality graphs, let's look at another example. This inequality is x > −20.

To graph this, we must include all the numbers greater than, but not equal to, −20. Therefore, we draw an open circle at −20 and an arrow to the right.

If the inequality were x is less than or equal to −20, then we'd need to change two things on the graph.

First, −20 is included in the inequality, so we use a closed circle. Second, this inequality consists of numbers less than or equal to −20, so we use an arrow to the left.

Oh no! Even though Timmy obeyed the speed limit, he was in such a hurry that he didn't notice a bump in the road. Now the cake is ruined!

Inequalities and Their Graphs exercise

Would you like to apply the knowledge you’ve learned? You can review and practice it with the tasks for the video Inequalities and Their Graphs.
More videos for the topic Inequalities