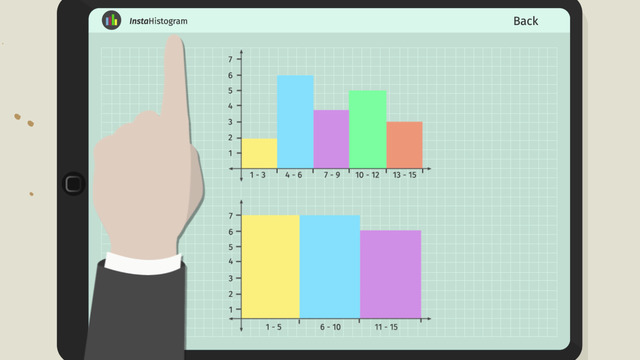 Information about the video Histograms

A histogram is a graphical method for displaying the shape of a distribution of a set of continuous data. It is particularly useful when there are a large number of observations. It is similar to a bar graph but groups data into ranges. A histogram is created based on a grouped frequency distribution. The class frequencies are represented by bars such that the height of each bar corresponds to its class frequency. A histogram allows us to see whether our data lumps in the middle or in the extremes, or whether the distribution is symmetric or not, or whether the distribution is normal or skewed. A histogram is used to show results of continuous data such as age, weight, height, or elapsed time while a bar graph is used when the data is in categories such as country or favorite movie. Since a histogram represents a continuous data set, there are no gaps between the bars. Absence of bars means no frequencies. To construct a histogram, split first data into intervals or bins. Each bin contains the number of occurrences of scores in the data set that are contained within that bin. The bin width chosen determines the number of class intervals and the starting point for the first interval affects the shape of the histogram. When constructing a histogram, it’s best to experiment with different choices of width and to choose a histogram according to how well it communicates the shape of the distribution. Common Core Reference: CCSS.MATH.CONTENT.6.SP.B.4

Jaques has decided to raise his profile as a restaurant critic with an exposé on restaurant pricing practices. To research, he's been gathering data on 20 carefully-selected restaurants, and he's saved the best for last - the hippest place in town to eat. Jaques plans to publish his findings using histograms.

Setting up a histogram

And on the horizontal axis, he divides the range of entrée prices into intervals, which are also called bins. The first interval, or bin, is 1 to $10, the next bin is 11 to $20, and so on. The bins must not overlap, and they must be of equal size.

As you can see, a histogram looks like a bar graph; but with a histogram, each bar represents a range of values rather than a single value. Histograms are a good choice to display data such as heights, weights, elapsed time, and prices. You get the idea.

To present the information clearly, it’s important to title and label your graph. A histogram may make data easier to analyze than if the same data were presented in a list. But, what if we change the intervals? Jaques increases the number of bins and decreases the range of each bin. This histogram presents the same data but displays smaller intervals. From this graph, you might conclude that the menu has a fairly even distribution of the price range for all the meals. So, keep in mind, when you create and interpret histograms, the size of the intervals can impact the interpretation of the data.

Jaques also collected the data on the number of meatballs served per dish of spaghetti. There is quite the range of meatballs on top of spaghetti - take a look. Some restaurants serve only 1 meatball in a single serving while others serve up to 15. From this histogram, we can conclude that most of the restaurants surveyed normally dish out 4 to 6 meatballs per entrée. Remember, when you create and interpret histograms, the size of the intervals can impact the interpretation of the data.

But we don’t know the cost of the meals or the size of the meatballs, so what do we really know? If Jaques only had three bins, he might have interpreted the restaurant’s pricing differently.

So, not only have you learned some sensational information about restaurants, you have also learned about histograms. Just like restaurants, there may be more to histograms than meets the eye. When creating and analyzing histograms, pay attention to the intervals also knows as bins. Be aware they can affect the appearance of a histogram and any resulting conclusions.

Jacques is finished with his investigation and his meal. Oh no, he forgot his wallet! I guess he’ll have to wash the dishes!

Would you like to practice what you’ve just learned? Practice problems for this video Histograms help you practice and recap your knowledge.
More videos in Statistics: Graphs and Charts