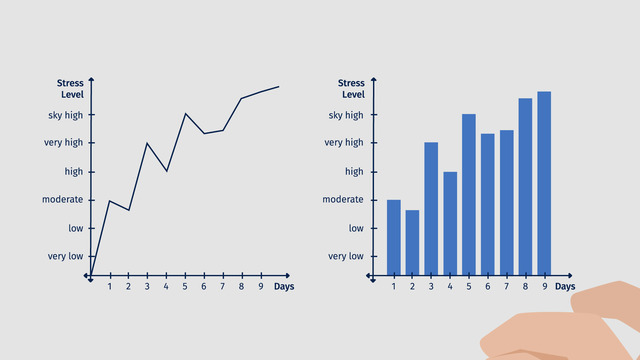 Basics on the topic Line and Bar Graphs

Both line and bar graphs can be used when presenting a set of data collected over a period of time. Bar graphs are plotted by drawing solid bars up to the quantity equivalent for each interval. It is very easy to recognize the high and low points of the data set when represented by a bar graph. Line graphs consist of points that represent the quantity for each interval, connected by a series of lines from one point to the next. The trending, whether increasing or descending, can be easily highlighted when the data set is represented by a line graph. Learn more about line and bar graphs by helping Frank the Insurance Guy relax on his vacation. Common Core Reference: CCSS.MATH.CONTENT.6.SP.B.4

To check his stress level, Frank the Insurance Guy is at his weekly doctor's appointment. The doctor's prognosis isn't good. The doctor says that Frank has TMS Syndrome; TMS - Too Much Stress, to be exact; and prescribes a vacation, STAT! Frank seems skeptical. To illustrate the urgency of the situation, the doctor shows Frank data documenting his stress level in the form of a few charts. With the help of line and bar graphs, surely Frank the Insurance Guy'll better understand his situation.

Let's take a look at the table. It shows the data for one week. To make the information easier to understand, Frank first draws a bar graph. Notice the days of the week are graphed on the x-axis, and the number of swimming pigs on the y-axis. The data points are illustrated with one bar for each day. See how the highs and lows are easy to pick out? Bar graphs are useful to show data that changes over time. But what if you wanted to plot more than one week's worth of data? What about three or four weeks' worth?

For tables with many data points, Bar graphs might not be the best way to go. Line graphs give you the same information as a bar graph. Each bar is replaced with a point. The resulting points can then be connected, making trends in the data easier to visualize.

Because Frank can’t handle so much down time, and because counting the pigs in the water isn’t a day-filling task, Frank also monitors his relaxation level every day of his vacation. After one week, the data table looks like this. Notice, he used mood icons to describe his relaxation level, rather than numbers. For a better overview, he draws a line graph. On the x-axis is the number of days, and on the y-axis, the mood icons, and then he draws in a line to connect the data points. Holy oink! The two graphs look almost the same!

Is there a relation between the number of pigs in the water and Frank’s relaxation level? Although we told him that just because the graphs look the same, there is not necessarily a relation - that would be ridiculous, but Frank isn't convinced. He lives for statistics, so he really believes the pigs are helping him relax. Frank has a crazy idea. Maybe Frank can relax when pigs fly?

Would you like to apply the knowledge you’ve learned? You can review and practice it with the tasks for the video Line and Bar Graphs.
More videos for the topic Statistics: Graphs and Charts