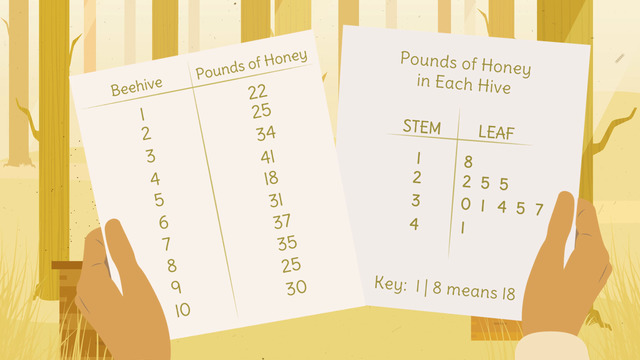 Basics on the topic Stem and Leaf Plots

A stem and leaf plot is a two-column diagram that organizes a given set of data and shows its frequency distribution. Each data point in a given data set is split into a stem and a leaf. The stem of a data point is all but the right-most digit of that data point, while its leaf is just its right-most digit. Data points with the same stem are grouped together and are individually marked in the stem and leaf plot by listing each of their leafs alongside their corresponding stem.

To make a stem and leaf plot, draw a table with two columns. In the left column, make a list of the distinct stem values which appear in the data set from least to greatest. Then list in the right column the leaves which appear for each stem in increasing order. Repetition of leaf values may occur if a certain data point appears more than once. This means that the number of entries in the given data set determine the number of leaves.

Stem and leaf plots are a convenient way to look at raw data since they allow us to display and analyze data at the same time.

Buford the Bee Keeper competes in the annual Honey Production Competition. He wins the competition every year, so you'd think he’d be certain of a win this year too, but the bees've been buzzing with complaints about the working conditions, so he's not so sure.

The rules for the competition are pretty simple: each beekeeper enters 10 beehives and at least 3 of the hives must produce at least 30 pounds of honey annually. The data is presented in a stem-and-leaf plots.

An advantage of stem-and-leaf plots is they are quick to make, and each data point is displayed. Let's have a look.
Using the numbers in this data set, first identify the smallest and largest numbers, or the minimum and maximum numbers, respectively. Then, create the stem, a vertical column listing the digits of each number excluding the rightmost digit. In this case, the whole parts of each number make up our stem. For the stem, don't list any repeats.

Next, create the leaves. In ascending order, list the digit in the ones place for each data point. For the leaves, repeating digits are allowed, so add a leaf for every data point. To double check that you listed all the data points, count the number of entries. There are 8 numbers in this data set, so there should be 8 leaves listed in the plot. A key is useful to help interpret the chart.

Ok, now that we've reviewed how to make a stem-and-leaf plot, take a look at the data from Buford’s entry from last year. Here's a table with last years' honey production. He identified the smallest and largest data points, 18 and 41. The stem is the leftmost column and lists the digits of each number, but excluding the rightmost digit. So in this case, we write the tens digit of each data point, with no repeating digits. Therefore, our stem is made up of 1, 2, 3 and 4.

The numbers listed in column two are the leaves and represent the digits in the ones’ place for each number in the data set. Buford's stem-and-leaf plot looks good. He titled his plot: Pounds of Honey in Each Hive. Notice the leaves are listed in ascending order, and the repeats are listed as needed. The key shown at the bottom helps you understand the chart.

The data is easy to interpret. It’s obvious the most common values range from 30 to 39 and, to figure out how many beehives produced at least 30 pounds of honey – you can just count the leaves: one, two, three, four, five and six.

Back to Buford and his bees. Last years, he walked away with the prize but what about this year? He weighs the annual amount of honey for each beehive. The honey drips and so does Buford. He's really nervous.
Uh oh! What the buzz?! The honey production is way down! Buford wonders why the production of honey produced by the bees has decreased by so much, and he's determined to find out why. Oh no! The bees have gone on strike. Can you believe it? They want to form a union!

Would you like to apply the knowledge you’ve learned? You can review and practice it with the tasks for the video Stem and Leaf Plots.
More videos for the topic Statistics: Graphs and Charts