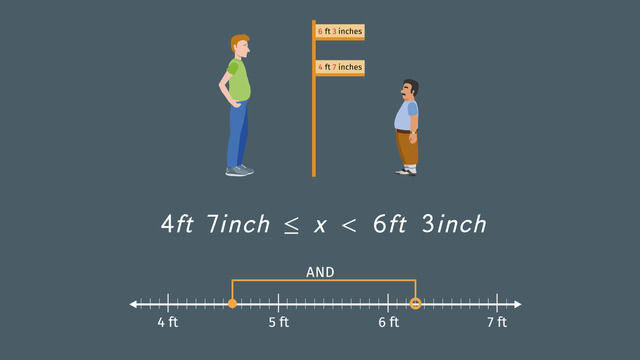 Information about the video Compound Inequalities

Compound inequalities are AND or OR inequalities. It’s important to understand the difference between AND and OR situations and also to recognize their graphs.

The graph of an OR situation (disjunction) will be shaded in two pieces. How do you solve compound inequalities? Set up the inequalities as two separate inequalities then use algebraic steps to solve. To solve the inequalities, use opposite operations with reverse PEMDAS to isolate the variable.

Jerry and Larry want to ride the rollercoaster, but they have a "little big" problem. What does this have to do with compound inequalities? Let me tell you.

Compound Inequalities on a Number Line: Conjunction and Disjunction

We'll use x to represent height. You can write this as a compound inequality with AND. x is less than 4 foot AND x is also less than 6 foot 3.

This is represented graphically by these parts. Be careful: If you flip the wording in the problem, you also have to switch the circles! This means an empty circle at 4 foot 7 and an filled circle at 6 food 3.

How to solve Compound Inequalities: Conjunction

Let's take a look at an example to figure out how to calculate compound inequalities: 4 < 2x < 10.

This is a compound inequality with AND. So you can split this into two inequalities and put the word AND in between, ending up with one inequality, 4 < 2x and the other inequality is 2x < 10.

Now you calculate each inequality separately. Since we have 2x in both equations, we should divide both sides of both inequalities by two; the signs stay the same.

You can bring the two solutions, 2 < x and x < 5, back into one compound ineqality by reversing the process earlier. Remove the AND and now line up the Xs to get: 2 < x < 5.

How to solve Compound Inequalities: Disjunction

For compound inequalities with OR, you already have two seperate inequalities to begin with. So you simply calculate each individually.

Now you have to divide the equations by the coefficients, or the numbers in front of the x, which is 3 in the first equation and 4 in the second.

Let’s get back to Jerry and Larry. They really want to ride the rollercoaster. Jerry has an idea. Jerry decided to give his shoes to Larry. Now their heights are just right.

Would you like to practice what you’ve just learned? Practice problems for this video Compound Inequalities help you practice and recap your knowledge.
More videos in Inequalities