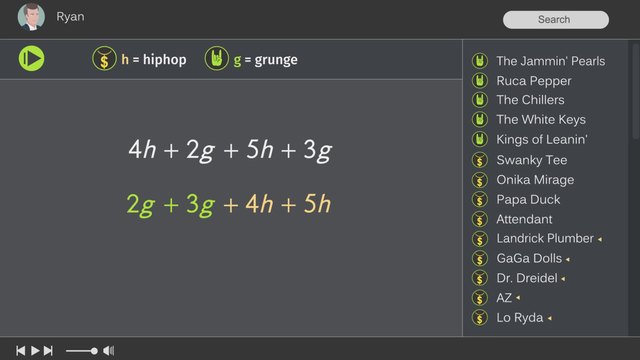 At the Top 40 Commutative Retirement Center, Ryan Secrets gets ready to host his annual New Year's Eve party. He's determined to make the party a big success because last year, he made a big mistake. He asked the guests to bring their own music and then he let them play whatever song they wanted in no particular order. As you can imagine, it was complete chaos! But, this year, Ryan has a plan to make a playlist by grouping the songs by genre. Let's help Ryan organize his playlist by writing equivalent algebraic expressions with addition and subtraction. Let's say you have a party and a friend brings four hip-hop songs and two grunge songs. Using ‘h’ to represent the hip-hop songs and ‘g’ to represent the grunge songs you can describe this situation with the algebraic expression, '4h plus 2g'. Now, imagine another friend brings 5 hip-hop songs and 3 grunge songs. You can write this as '5h + 3g'. Now, how many songs of each genre do you have? To write an equivalent expression, first, let's use the Commutative Property of Addition so that terms with the same variable are written together... These are called like-terms. Like-terms are terms in an algebraic expression that have the same variable raised to the same power. That means we combine the g’s and then the h’s by adding their coefficients, giving us '5g plus 9h'. Remember, coefficients are the numbers in front of the variables.

Okay, it's time to get this year’s party started! Three retirees just came in like a wrecking ball and each one brought music. What kind of music did they bring? They brought electronic dance pop and rock ballads. One of them brought 3 pop songs and 4 rock ballads another brought 2 electronic dance and 5 pop songs. And the last brought 4 electronic dance songs. Ryan Secrets removes three 3 rock ballads 2 pop .and 3 electronic dance songs because these songs are so five minutes ago. Let's help Ryan write an equivalent expression for this situation. First, use the Commutative Property to reorder the terms in alphabetical order then, just like we did before, we combine the like terms. Now, Ryan Secrets has some great playlists. This music is H...O...T -- HOT! So remember, when writing equivalent algebraic expressions use the Commutative Property of Addition to reorder the terms then combine like-terms. To help you remember this know that the word ‘commutative’ comes from the word ‘commute’, which means to go back and forth or move around. Ryan Secrets' system to reorder the playlist worked. This year's bash is a big success. Oh! It’s just after six in the evening; the party must be in full swing by now. Hmmm...what a shame...I guess no one's ringing in the new year!

Would you like to apply the knowledge you’ve learned? You can review and practice it with the tasks for the video Writing Equivalent Algebraic Expressions with Addition and Subtraction.
More videos for the topic Use Properties of Operations to Generate Equivalent Expressions

Writing Products as Sums and Sums as Products

Using the Identity and Inverse to Write Equivalent Expressions