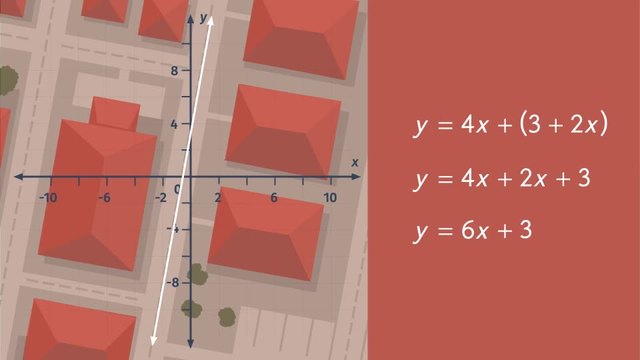 Basics on the topic Linear and Nonlinear Expressions

While riding his scooter, Mofa loves to put the pedal to the metal and tear up the back roads. But he's amassed a pile of tickets for driving recklessly and now, he's in a heap of trouble. Today, he's in traffic court trying to fight the charges. He tells the judge that he did nothing wrong all he did was drive in a perfectly straight line, following the perfectly straight roads. But, the city attorney isn’t having any of it. He knows that Mofa drove off road and he's going to prove it using the graphs of linear and nonlinear equations. All the streets in Linear City are perfectly straight and can be represented by linear equations. Linear equations contain variables raised to the first power. That means an equation is not considered to be linear if, when written in its simplest form, any of the variables are in a denominator under a radical...squared...cubed...or raised to a higher power. When graphed, a linear equation is a straight line. Let’s take a look at an example of a route Mofa drove. y' is equal to 4x plus the quantity '3 plus 2x'. Let's simplify this equation. First, reorder the terms to put the like terms together. Then, combine like terms giving us the simplified equation, 'y' is equal to 6x plus 3. Since the exponent of each variable is equal to one the equation is a first degree equation. Remember, when an exponent is equal to one, the exponent is most often assumed, not written. But what about equations that have variables raised to powers other than one? These equations are called nonlinear equations! Nonlinear equations also include rational expressions where a variable is in the denominator when written in simplest form. Nonlinear is just another way of saying the graph of an equation is not a straight line. Let’s take a look at an example of a nonlinear equation. Here's 'y' equals 2 over 'x'. This is a rational equation, meaning at least one term is expressed as a fraction. Look at those curves! Because the graph of this equation is not a straight line, it is a nonlinear equation and therefore, not a road in Linear City. Let's take a look at another route Mofa took that he claims was in a straight line. Mofa's route can be represented by the equation 'y' is equal to 'x' plus the sum of 'x' and one plus the difference of 'x' and two. To rewrite the equation, first group like terms and then simplify. We get the equation 'y' is equal to 3x minus 1. Is this equation linear or nonlinear? Since the variables are raised to the first power, this is a linear equation. But let's check the surveillance footage. Sure enough, Mofa was driving in a straight line! But wait! There's more evidence to be presented. This equation doesn't look linear, because the variable 'x' is cubed. But let's investigate by graphing. First, use the distributive property to get rid of the parentheses. Then, reorder the terms according to standard form to get 'y' equals -4x to the third plus 8. Now we can graph. Whoa! Mofa was driving WAY out of control! That is definitely not a straight line and not a linear equation. Mofa’s in big trouble because there’s still more evidence against him. This is when Mofa drove the route 'y' equals 'x' squared here's when he drove the route 'y' equals the square root of x and, here's 'xy' equals 5 which, after isolating the 'y' gives us 'y' is equal to 5 divided by 'x'. Oh man, none of these routes are straight lines and none of these equations are linear. With plenty of evidence against him, the judge is ready to rule. Mofa is definitely going to have to pay a fine or maybe worse! Oh no, it looks like they confiscated his sweet ride but I guess one wheel is better than none!

Would you like to apply the knowledge you’ve learned? You can review and practice it with the tasks for the video Linear and Nonlinear Expressions.
More videos for the topic Writing and Solving Linear Equations