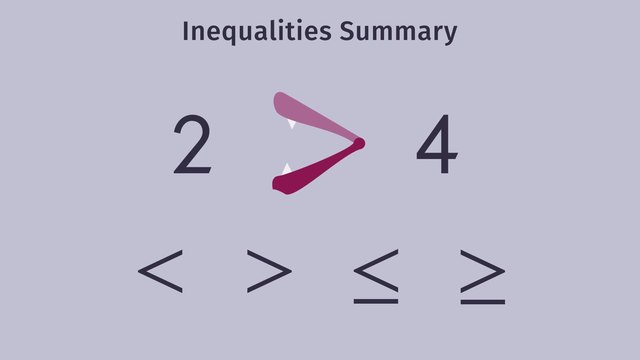 Inequality symbols are a shorthand notation used to compare different quantities. There are four inequality symbols “greater than”, “less than”, “greater than or equal to”, and “less than or equal to”. So, for instance, the sentence “5 is greater than 2” can be written as 5>2. A good way to remember which number is greater is to think of each symbol like a mouth; the mouth will always eat the larger of the two numbers being compared. Learn about inequality symbols by helping Christopher the vampire pack the maximum number of supplies he needed for his trip to California. Common Core Reference: CCSS.MATH.CONTENT.6.EE.B.8

Christopher the Vampire is a foodie and he needs a fresh, new story for his blog: The Vegetarian Vampire. He’s working on a new piece, so he wants to go to a place where his favorite fruit grows: the blood orange. He read on Vampedia that blood oranges grow in California, which is perfect because he’s always wanted to visit the underground gardens there. To help him pack, he uses his knowledge of inequality symbols. And he has all his supplies laid out in his bed? Capes, check. Hair gel, check. Blood orange juice, check. But how much of this stuff is he allowed to carry with him on the plane? Let's take a look at the number line.

Let's take another look at the different inequality symbols. A good way to remember which number is greater, is to think of each sign like a mouth. The mouth will always eat the larger of the two numbers being compared. For example let's compare 2 and 4. Since 2 is less than 4, the mouth will eat the 4. If the mouth opens to the right, it's read: 'a' is less than 'b'. However, if the mouth opens to the left, it's read: 'a' is greater than 'b'. As we saw earlier, the greater than and less than symbols can also be combined with the equal sign. When we say 'as many as' or 'no more than', we mean 'less than or equal to' which means that a could be less than b or equal to b. But, when we say 'at least', we mean 'greater than or equal to'. Here a could be greater than b or equal to b. Let’s see how Christopher the Vampire is enjoying his vacation. OH NO! No more blood oranges?!? This might make his vacation a bit tougher...

Would you like to apply the knowledge you’ve learned? You can review and practice it with the tasks for the video Inequality Symbols: <, >, ≤, ≥.
More videos for the topic Solving Equations

What Makes a Number Sentence True or False?

One-Step Equations with Multiplication and Division