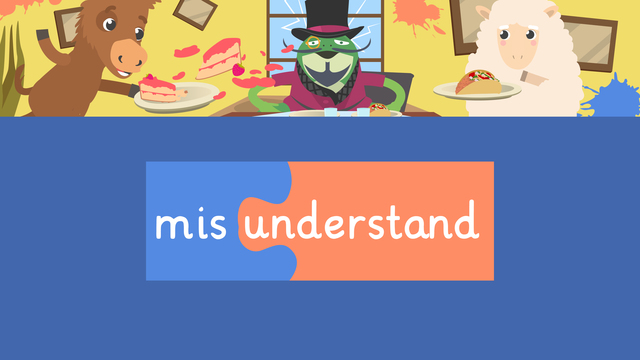 Basics on the topic Prefixes: Pre-, Re-, and Mis-

Kala just copied down the Tips For Hosting a Proper Dinner Party, and it’s time for them to use their tips to host their friend Jeremiah! Oh no! It looks like Kala wrote down the wrong prefixes for a few of the words! Let’s learn about the prefix re meaning, prefix pre meaning, and the prefix mis meaning to help Kala and Dee properly host their special guest!

What is a Prefix?

A prefix is a pair or group of letters at the beginning of a root word, also known as a base word, that changes its meaning.

Prefix Meaning for Re

What is the meaning of re prefix? The general meaning of the prefix re is back or again. For example, you may reread something that is difficult, which means you are reading it again to understand better.

Now that you know the pre- prefix meaning, let’s learn what is the meaning of prefix mis.

Want some more practice with prefixes such as words that start with the prefix pre meaning before? On this website you will find examples, worksheets, and other activities!

Transcript Prefixes: Pre-, Re-, and Mis-