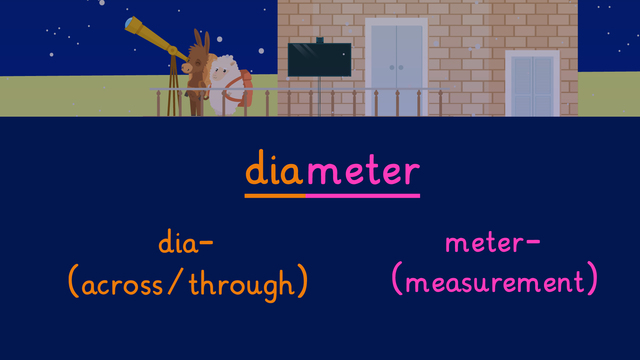 Kala and Dee are at the observatory to check out the new exhibit about Mars. During the presentation, they come across some unfamiliar words. In this video, we will learn how to use Greek and Latin root words to help us determine the meaning and deepen our understanding of texts.

"Determining Meaning Using Greek and Latin Roots." Kala and Dee are at the observatory to check out the new exhibit, Mars: The Red Planet. Welcome Astronomers...as you set out to explore the wonders of Mars. Mars is known as the Red Planet. It is smaller than Earth with a diameter of four thousand two hundred seventeen miles. “What is a diameter?” “Let’s click here to find out more.” The word diameter is made with the Greek and Latin root words… dia and meter. The root dia means across or through ... and meter is a root having to do with measurement. When we put them together to make the word diameter, we know that it is talking about the measurement across or through Mars. To make sure we understand, let’s reread the sentence adding to the unfamiliar word with what we know about its meaning. Mars is known as the Red Planet. It is smaller than the Earth with the diameter, or measurement across, of four thousand two hundred seventeen miles. Let’s think of some other words that have the roots, dia, or meter in them. Other words with dia are dialogue talking with someone across from you and diagonal, which is a line drawn through a shape from opposite corners. Words with the root, meter, are... thermometer, which measures temperature... and perimeter the distance around the outside of a shape. In 1610 Galileo Galilei, an astronomer was the first to observe Mars with a telescope. Do you see words that have Greek or Latin roots? Astronomers and telescopes have roots. Astro is in the word, astronomer. Astro means connected to the stars so.... an astronomer is a person who studies stars. Telescope has tele and scope. Tele means far away… and scope means to see. A telescope is an instrument used to see far away. Now, reread the sentence with our understanding of the meanings. In 1610 Galileo Galilei, an astronomer, or person who studied the stars, was first to observe Mars with a telescope, an instrument to see far away. Let's think of other words that have these roots. Other words starting with astro are:.. asteroid(...) a small rocky object that orbits the sun... astronaut(...)a person who travels into space... and astronomical(...) everything in the universe beyond Earth's atmosphere. For tele, we have... telephone...used to communicate at distances... television...used to watch things that happened far away... and teleport(...) to instantly take to a faraway place. Scope makes... kaleidoscope (...) an instrument used to see beautiful colors... and microscope(...) an instrument to see something very small. The terrain of Mars is rocky with canyons and craters, and its atmosphere is too thin to stay warm. Terrain and atmosphere have Greek and Latin roots. What do you think these words mean? (...) Terrain has terra, meaning land. Atmosphere has sphere, which means round or ball. Now, reread the sentence with the meanings. The terrain, or land, of Mars, is rocky with canyons and craters, and its atmosphere, or ball of air that surrounds it, is too thin to stay warm. Let's think of other words that have these roots. Words with terra are:... terrariums... it's like an aquarium, but with plants. and extraterrestrial something that is out of this world. Words with sphere are... hemisphere half of the Earth and biosphere parts of Earth that can support life. Just imagine that one day, we too can travel to Mars! While Kala and Dee look up to the night sky, let's review... Remember... roots are a piece of a word that helps give it meaning. Learning roots help us decode new, unfamiliar words when we see them in a text. "Let's see if we can find Mars with the telescope." "OOHHH meteoroids!" "Make a wish!" "What did you wish for?" "What did YOU wish for?"

Would you like to apply the knowledge you’ve learned? You can review and practice it with the tasks for the video Determining Meaning Using Greek and Latin Roots .
More videos for the topic Decoding

Decoding: Look at the picture

Decoding: Stretch Out the Word