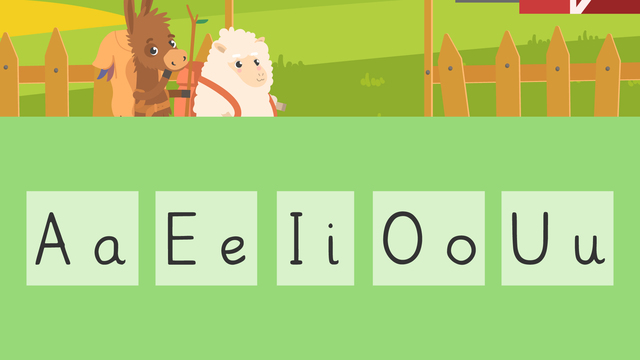 Basics on the topic Long and short Vowel sounds

In This Long and Short Vowels Video

Dee and Kala are visiting Alphabet Farm and notice lots of sounds coming for the vowel pens. As they get closer, they see that one pen is labeled ‘Short’ and the other ‘Long’. But why? In this video on long vowel and short vowel sounds, Dee and Kala get an introduction to vowels.

Long and Short Vowels for Kindergarten

Vowels are a special set of letters in the alphabet: A, E, I, O, and U. These letters can make two kinds of sounds: long sounds and short sounds.

When a vowel is long, it says its alphabet name. It sounds exactly like the name we sing in the A, B, C’s ! When teaching long and short vowels in kindergarten, it is important to practice examples of the vowel sounds. Here are examples of long vowel sounds:

When a vowel is followed by a non-vowel letter it makes a short sound. The vowel does not sound the same as when we say it in the alphabet. The short vowel makes a shorter sound. Here are examples of short vowel sounds:

There are many words that have short and long vowels in english. These are just a few examples of the first sounds vowels can make.

Dee and Kala took a visit to Alphabet Farm. They notice lots of sounds coming from the vowel pens. There are two pens, one labeled "long" and one labeld "short". What could this mean, they wonder. Let's help Dee and Kala by learning all about "Long and Short Vowel Sounds". Vowels are a special set of letters in the alphabet: A, E, I, O, U. These letters can make two types of sounds: long and short. When a vowel is long, it says its alphabet name. It sounds exactly like the name we sing in the ABCs! Let's practice the long vowel sounds together! A says A like ape. A, ape, A. E says E like e-mail. E, e-mail, E. I says I like ice. I, ice, I. O says O like open. O, open, O. U says U like unicorn. U, unicorn, U. When a vowel is followed by a non-vowel letter it makes a short sound. It does not sound the same as when we say it in the alphabet. The short vowel makes a shorter sound. Let's practice the short vowel sounds together! A says /ă/ like add. A, add, /ă/. E says /ĕ/ like egg. E, egg, /ĕ/. I says /ĭ/ like igloo. I, igloo, /ĭ/. O says /ǒ/ like olive. O, olive, /ǒ/. U says /ŭ/ like umbrella. U, umbrella, /ŭ/. Now that we know the difference between long and short vowel sounds, let's practice with some of the words Dee and Kala hear! The first word we hear is ‘ate’. Can you help Dee and Kala decide whether we hear a long A or a short one? Remember a long A will say its name, A, like ape. A short A will say /ă/ like add. Do we hear the A sound or the /ă/ sound in the word ate? We hear the sound A in ate, so it is a long vowel! Finally, we hear the word otter. Do we hear a long O or a short O? Remember a long O will say its name, O, like open. A short O will say /ǒ/ like olive. Do we hear the O sound or the /ǒ/ sound in the word otter? We hear the sound /ǒ/ in otter, so it is a short vowel! Before we see what Dee and Kala have been up to on the farm, let's remember! Today we learned about long and short vowel sounds. Vowels are a special set of letters in the alphabet: A, E, I, O, and U. They can make two types of sounds: long and short. Long vowel sounds happen when the vowel says its alphabet name. Short vowel sounds do not sound like the letter's name, they sound shorter. "That was a fun visit, Kala! "Agreed, I'm glad we even got to buy some E, eggs, /ĕ/ from the stand before we left."