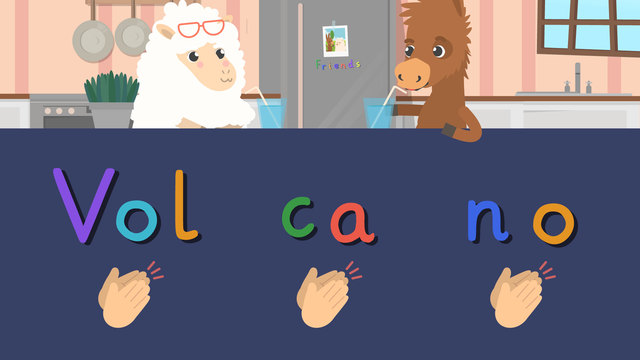 Basics on the topic Counting and Segmenting Syllables

In this Counting Syllables Video

Dee and Kala are sitting at the kitchen counter. As Dee stares at the refrigerator, he wonders aloud about magnetic words on it. “Do you notice how some words are long and some words are short?” he says. “Yes, why do you think that is?” Kala responds. In this introductory phonics video, Dee and Kala learn about counting syllables and syllables segmenting.

All words are made up of one or more syllables. Let’s look at an example word, like donut. It has syllables! Syllables have one vowel sound, like the ‘o’ in ‘do’ and take one puff of air to say, as in ‘nut’.

Words can have a different number of syllables depending on their length. To learn words, we can pull them apart into their syllables: ‘do’ and ‘nut’ make donut! This is called segmenting.

To segment a word, it helps to clap it out as you say it aloud. ‘Do’ gets one clap and ‘nut’ get another clap. Count the number of claps you make to see how many syllables the word has! Donut has two claps, so it has two syllables.

Let's try it with a longer word like volcano. First, say the word aloud: volcano!

We clapped three times, so ‘volcano’ has three syllables!

Why Is Counting Syllables Important?

Counting syllables is important because it helps us learn to read, write and spell words. If you can segment syllables and count them, you can figure out how to say them aloud or write them down.

Summary of Steps: Segmenting Words and How to Count Syllables

Words are made of parts called syllables. Syllables have one vowel sound and take one puff of air. To learn words, we can pull them apart into their syllables which is called segmenting. To segment a word,

Would you like to apply the knowledge you’ve learned? You can review and practice it with the tasks for the video Counting and Segmenting Syllables.
More videos for the topic Words, Syllables and Sounds