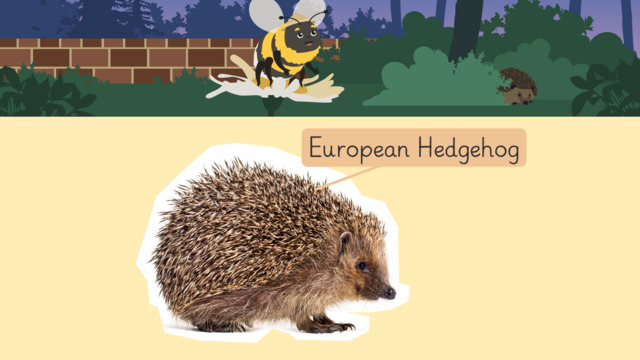 Give us a rating!

Basics on the topic The Hedgehog

Newton is on a discovery tour through the forest. What is that? It's a hedgehog! Let's learn together with Newton all about "the hedgehog". The hedgehog is easy to see. They have spiked fur, called quills. Hedgehogs live in different parts of the world, but they are only found in zoos or as pets in the U.S. . THIS hedgehog lives in Europe, and is called the European Hedgehog, Hedgehogs look cute, but don't be fooled. The hedgehog is a predator, an insectivore AND carnivore. This means that the hedgehog eats insects and other animals. They eat insects such as beetles, ... arthropods like spiders, and isopods such as a roly-poly, ... mollusks like slugs, ... small birds, ... and rodents such as small mice. They are also scavengers, which means, they eat dead animals. The hedgehog's habitat provides many places to hide. Long grass, ... hedges, ... foliage and ... rotting wood are things that can be found in their habitat. Since there aren't many large fields near a city, not many hedgehogs live there. However, hedgehogs can hide particularly well in the cities and towns and in people's gardens. When animals like the hedgehog live near people in cities, they are known as cultural successors. Each hedgehog has a special place where they build several shelters to live in. Their home can be in a hollow tree trunk, ... an old garden house or ... in a large pile of leaves. It's important that the shelter is dry and protects them from the wind. Sometimes people like to do something nice for a hedgehog, like build them a shelter! Hedgehogs are common and have a very specific lifestyle. People rarely see them, but do you know why? Hedgehogs are nocturnal. This means, they sleep during the day and are active at night. If a hedgehog is spotted, it is usually alone: ​​hedgehogs are loners. Therefore, every hedgehog has an area where they build several shelters to live in alone. Some tips people follow to make their garden hedgehog-friendly are: Poison for mice or snails can harm the hedgehog. So it is important not to use it. If someone finds a particularly small hedgehog in autumn, they can bring it to a shelter or feed it cat food. Because only larger hedgehogs survive the winter. Remember, to always ask a parent before treating animals. A hedgehog has to weigh at least as much as a small water bottle to prepare for winter. Older hedgehogs can weigh as much as a large water bottle. Ah there is Newton! Let's see what ze wrote down in zir notebook. Hedgehogs, have a spiked fur ... and are loners. We rarely see them because they are nocturnal. Hedgehog's food consists of smaller animals and insects. Since their habitat is similar to gardens, cities, and towns, they sometimes live near humans. We therefore call hedgehogs, cultural successors. People can help hedgehogs that need food or shelter. Hedgehogs are really great animals! Now Newton has learned enough about Hedgehogs, so ze sets back on zir way. Until next time!