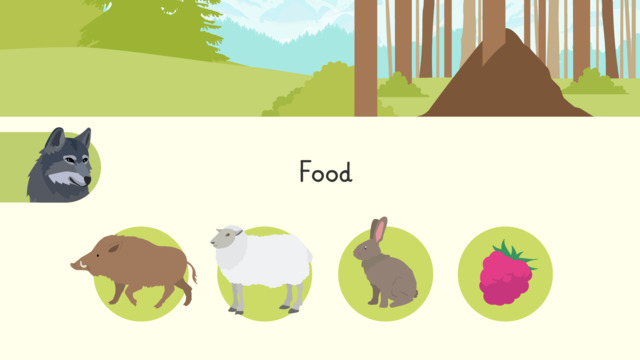 Basics on the topic Forest Animals

What animals live in the forest? What food do these animals eat? Learn all about the animals of the forest and their food in this video.

Newton is looking for a flock of aphids to give zir honeydew. In Newtons search, zi discovers the animals in the forest. Oh! What is that? Newton has found a mound where the wood ant lives. Newton knows that wood ants eat other insects, as well as nectar and honeydew. The wood ants live in colonies, which means that quite a lot of ants live together and share their tasks. There is the queen, who lays eggs, and her children, the workers, hatch from these eggs. Male ants only live for a short time during the year. The workers take care of the nest building, the collection of food, the defense, and child care. Huh, what is that? Look, over here! The woodpecker knocks holes in rotten wood and trees with its beak. The knocking can be heard very far away. Woodpeckers peck at trees for their food, which are mostly insects under the tree bark. Woodpeckers also build cavities, or holes, in trees in this way, which is where their nest is. A pair of woodpeckers raises fledglings, or baby birds, there. When the young birds can fly, they leave the parents. Slowly, dawn comes around and Newton has forgotten the time. Shh, now we have to be quiet. Over there we see deer. The deer are very shy and listens with their large ears to make sure no predator sneaks up on it. Adult deer live alone and feed on grass, shrubs, and buds of young trees. The male is called a roebuck, the female a doe, and the young deer a fawn. Huh, where is everyone? Ahh, there is a wolf! A wolf hides from humans, but deer are part of their diet. So are wild boars, sheep, or rabbits. But a wolf also likes sweet fruits and other treats. The wolf lives in a pack, which is their family. The father is called a wolf, the mother is called a she-wolf, and a young wolf is called a pup. Each pack has a territory, where only they are allowed to hunt. Do you hear that? Who is digging? That is a wild boar. Wild boars are nocturnal, which means they only come out at night. They are also omnivores, so they eat plants and animals like mushrooms, fruit, dead animals, insects, and plants. Wild boars live in a herd, which is a group. The female is called a sow, and a baby wild boar is a piglet. The sow can be especially dangerous for humans when she wants to defend her piglets. The boar, which is the male, lives alone. Oh, I think we should follow Newton. You can see here what Newton has discovered today. In the forest there are many different animals, and most of them we only see sometimes. They all need different foods, and sometimes they live alone or in groups. Just like Newton, who is finally back in zis nest. Except, zi forgot the honeydew!

Would you like to apply the knowledge you’ve learned? You can review and practice it with the tasks for the video Forest Animals.
More videos for the topic Animals