The Graph of a Linear Equation in Two Variables 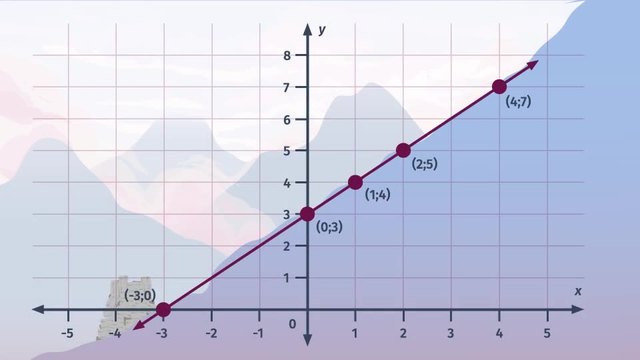 The graph of a linear equation in two variables is a straight line. This can be used to describe many relationships and processes in the physical world. It gives a visual representation of the relationship between two variables such as how quickly a projectile is moving or how fast a chemical reaction is proceeding. It can also be used to show the comparison between two units of measurement like centimeters and inches, meters and miles or degrees Celsius and degrees Fahrenheit. Learn how to graph a linear equation in two variables by helping Mei Long build a temple on top of a high hill in a village called Nanjie in order to house an enormous mythical dragon believed to bring prosperity and good fortune. Common Core Reference: CCSS.MATH.CONTENT.8.FA.3

Transcript The Graph of a Linear Equation in Two Variables

In the hilly region surrounding the village of Nanjie, a mythical dragon appears on the horizon, promising to bring prosperity and good fortune to the land. But the tiny village has no temple to house the enormous dragon. And without a temple, the dragon will leave and take his luck elsewhere. So, the villagers decide to build a structure on top of a high hill. But, how can they get all their building materials up there before the dragon leaves? In the face of this crisis, an unlikely hero emerges: Mei Long, a packing assistant with a great idea. She's going to use the Graph of a Linear Equation in Two Variables to get the job done. Mei Long's plan is to use a linear equation to get the villagers to stand in a line and pass the building material from one person to the next. A linear equation is a first-degree equation, meaning the variables are raised to the first power. The graph of a linear equation is always a straight line. This linear equation has two variables, both of which are raised to the first power. We don't see the exponents, because raising a number to the first power is the same as keeping that number the same. Let’s use this equation to set up a table, by plugging in some values for 'x'. It looks like Mei Long used -3, 0, 1, 2, and 4 so we'll use those values as well. Now to solve for 'y,' just substitute the values for 'x' from the table, one by one, into the linear equation. When 'x' is equal to negative 3, we get 'y' minus negative 3 is equal to 3. Which we can rewrite as 'y' plus 3 is equal to 3. Now, use opposite operations to solve for 'y'. y' is equal to 0. Now we can add that to our chart. Let’s solve one more. When 'x' is equal to 0, we get 'y' minus 0 is equal to 3. So 'y' is equal to 3. We can fill in 3 next to 'x' equals 0 in our chart as well. If we plug in the remaining values for 'x', we can fill in the rest of the table. Do you see a pattern? With linear equations, it’s easy to predict the next set of points because they will always increase or decrease at a constant rate. That's why, when we plot the points of a linear equation, we always end up with a straight line. Now the villagers know just where to stand in order to pass the building materials up the hill. They're working smarter, not harder! But what's going on on the other side of the hill? Without the help of the Mei Long, the villagers plotted their own points using this equation. But is this a linear equation? There are two variables, both raised to the first power, but why aren't the villagers in a straight line? Let's check these two points. They don't seem right. Let's first look at where 'x' is equal to 3 and check that the villagers plotted that point correctly. Substitute 3 in for 'x' and rewrite the equation And use opposite operations to solve for 'y.' y' is equal to 3.5. Let's correct that in the table. And now for 'x' is equal to 5. As always, rewrite the equation, then use opposite operations to solve for 'y'. y' is equal to 2.5. We can correct this in our table now, too. Okay, using our corrected points, let’s get those two villagers back in line! Mei Long and the villagers really pulled together to get that temple built to the dragon’s satisfaction. And they did such a good job, it looks like there’s more luck on the way! Fortunately, you can never have too much of a good thing. Right?

The Graph of a Linear Equation in Two Variables exercise

The Graph of a Linear Equation in Two Variables

The Graphs of Horizontal and Vertical Lines