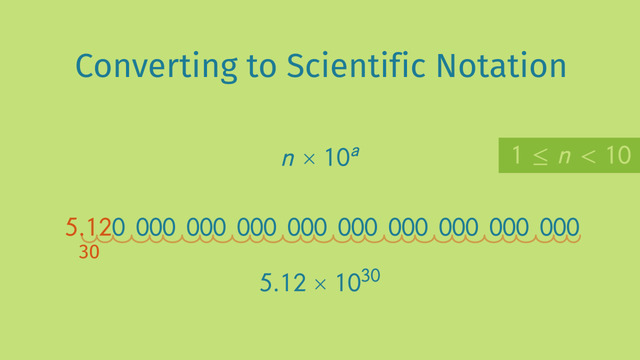 Information about the video Reading and Writing Scientific Notation

Scientific notation is of the form n•10a, where n, the coefficient, is always greater than or equal to 1, but less than 10. The 10 is called the base, and a is the exponent which is an indication of how many times the coefficient must be multiplied (or divided, when a is negative) by 10.

To convert a number into scientific notation, it is important to remember that the coefficient must always be greater than or equal to 1 and less than 10. The number of times we move the decimal point from its original position to the position where the number we are converting is greater than or equal to 1 and less than 10 is the exponent a of our base 10; the exponent is positive if the decimal point moved from the right towards the left and negative if the movement was from left to right. The number resulting from moving the decimal point is our coefficient n.

Expressing and understanding numbers in scientific notation have extensive applications in many fields of Science, like Molecular Biology, Astronomy, and Engineering.

Dorothy is a really hardworking student. She has an internship at the prestigious Frank N. Stein Laboratory! At the lab, she works in the biology department, and her job is to observe how different types of bacteria grow. How fascinating!

It’s the end of Dorothy's internship, and she needs to write a final report about what she learned. She has all the facts, so she just needs to write up her findings in a neat report. Can you believe there are about 5 million, trillion, trillion bacteria on Earth? Wow! That's a lot of bacteria and that’s too many zeros to write down – her report is a mess. There’s another way! Dorothy can write this huge number in scientific notation*! Let’s review how to read and write numbers in scientific notation.

Just to review, scientific notation makes really BIG and really SMALL numbers easy to read and interpret. To write numbers in scientific notation, we write 'n', the coefficient, times 10, the base, raised to the power of 'a', which is the exponent. N' must be greater than or equal to 1 and less than 10. 10 raised to the 'a' power represents the number of times we must multiply 'n' by 10 to get back to the original number, the really big number with all the zeros.
To make this easier to understand, let’s look at an example: We'll write the number one million in scientific notation. To do this, move the decimal over until you have a coefficient that is greater than or equal to 1 and less than 10. Now, count the number of times you moved the decimal. Each time you move the decimal over one place value to the left, it's the same as multiplying by ten. So, since you moved the decimal six places to the left, we can write this as 1 x 10⁶.

Let’s help Dorothy write her report. We’ll use the same process to this write this really big number in scientific notation. Scoot the decimal point over til you have a coefficient that is greater than or equal to 1 but less than 10, so this makes 'n' equal to 5.12. Now count the number of times you moved the decimal to the left and use that number to write the exponent using 10 as the base. We moved the decimal 30 places to the left. So we can write the number in scientific notation as 5.12 x 10³⁰.

During her internship, Dorothy also observed the mass of various bacteria cells, and she learned that one really, really small bacteria has a teeny-tiny small mass. This critter is really small! Luckily for Dorothy, she can use scientific notation to write really small numbers too. We use the same process as before, but this time we move the decimal in the opposite direction. Each time you move the decimal over one place value to the right, it's the same as dividing by ten.
Remember, when the number in standard form is less than 1, the exponent is always a negative number. Our new number, 1.46, is greater than or equal to 1 but less than 10. Now count the number of places you moved the decimal point to the right, and write that number as the negative exponent. In scientic notation, the number is 1.46 x 10⁻¹⁴.

Converting from Scientific Notation to the Standard Form

Now that Dorothy used scientific notation to write her report, it’s much easier to read. Just look at that last fact. Wow! These particular bacteria have a very fast rate of growth. Now that's what I call a 'cultured' party!

Would you like to practice what you’ve just learned? Practice problems for this video Reading and Writing Scientific Notation help you practice and recap your knowledge.
More videos in Exponents