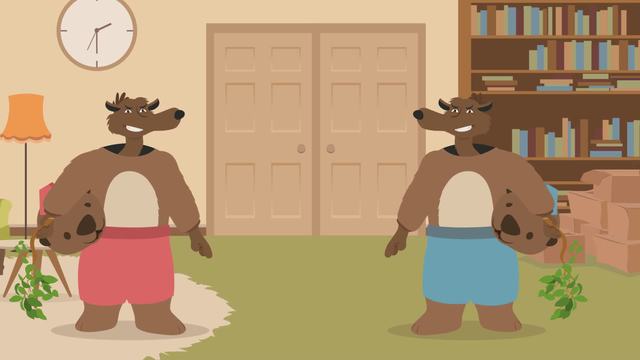 Information about the video Problem Solving When the Percent Changes

After this lesson, you will be able to solve multi-step problems related to percents that change.

The lesson begins by demonstrating how a double number line can be used to represent complex problems involving multiple percentages. It then illustrates how to use ratios to solve for your unknown value. It concludes with a simple method for checking your work.

Learn how to solve problems when the percent changes, by helping figure out which weasel scared more people at the amusement park!

This video includes key concepts, notation, and vocabulary such as: a double number line (a visual representation of a ratio, in which the units are represented by two simultaneous number lines); and proportional relationships (an equality of two ratios).

Before watching this video, you should already be familiar with ratios, double number lines, and the relationship between part, whole, and percent.

After watching this video, you will be prepared to solve simple interest problems.

Common Core Standard(s) in focus: 7.RP.A.3 A video intended for math students in the 7th grade Recommended for students who are 12-13 years old

Behind the scenes at the world's most wooden amusement park, Otter This World, Harriet the park manager has been skimming reviews on Welp?.com all morning and comes across some shocking comments. It seems as though the mascots have been jumping out from behind bushes and scaring customers. Just to make sure these comments are rooted in truth, Harriet checks the park's CCTV feed sure enough, two of the mascots have been scaring customers! Harriet summons the terrible twosome into her office to give those weasely weasels a piece of her mind but then these two jokers try to get out of trouble by saying things like, "last week, he scared 40% more than me!", and, "yeah, but I only scared 10 this week." Since she can't tell the weasels apart on CCTV Harriet must be able to solve problems when the percent changes. This is what the weasels told Harriet: In the first week, the weasel wearing red said the weasel wearing blue scared 40% more kids than he did. The blue weasel countered by saying he only scared 10 kids in the second week. Finally, the red weasel pointed out that, since he was sick during the second week, and he hadn't scared any kids by the end of the second week, the weasel in blue had scared 160% as many kids as he did. That was a mouthful! We can use a double number line to help us represent this information and finally figure out how many children the two weasels have been scaring. In order to solve this problem, we need to know what percentage a certain number of scared kids is equivalent to. For example, we know the red weasel only scared kids in week 1, but we don't know how many kids that is. So the red weasel's first week total is 100%. The blue weasel's first week saw him scare 40% more kids than the red weasel so we can say that the blue weasel scared 140% of the red weasel's week 1 total. We also know that the blue weasel scared a total of 10 kids in the second week which amounts to a total of 160% of the red weasel's first week total. We can subtract 140% from 160% to see that 10 scared kids represents 20%. Now, we can find out how many kids 100% equals by setting up a simple ratio: 10 kids over 20% equals 'the number of kids scared by the red weasel in week 1' over 100%. Let's call this unknown 'x'. So now we have 10 over 20% equals 'x' over 100%. First, cross multiply then divide both sides by 20 to isolate the 'x' 20x divided by 20 is, of course, x and finally, dividing 1,000 by 20 gives us 50. So the weasel in red scared 50 kids in the first week. Now, all we have left is to find this part here and add that to 50 to find out how many kids the blue mascot scared in week one. To find out how many scared kids equals 40% we can multiply 50 by the decimal form of 40% which gives us 20 scared kids. So, now we know that the red weasel scared 50 kids in week one while the blue weasel scared 50 plus 20 kids, or 70 kids in week one. Is 70 140% of 50 like the red weasel claimed? To check your work, you simply have to multiply the red weasel's week 1 total of 50 by the percentage in decimal form. In our case, that means 50 times 1.4. 50 times 1.4 is equal to 70! To find the total number of kids scared by the blue weasel by the end of the second week we just need to add 10 to the blue weasel's week 1 total of 70, giving us 80. Yes, we still need to check our work. 50 times 1.6 is equal to 80! So we were right! Together, the two weasely weasels scared 130 kids in two weeks! Okay, time to review. Whenever you have a problem that's stated with a lot of confusing percents you might want to start with a visual representation of the given information. For this example, we drew a double number line and labeled the weeks. Then you should label what you know. Next, look for where you know the value of a certain percent. You can eliminate starting with any parts where you're missing information. Finally, use this piece of information to help fill-in-the-blanks using simple ratios. Harriet the Otter foils the weasels' attempt at weaseling out of trouble. As a punishment for scaring kids, the two wascally weasels have to spend the next week in a costume made for two. It looks like the blue weasel is on the wrong 'end' of this deal since he scared more kids. It's gonna be a long week.

More videos in Percent Problems Including More Than One Whole