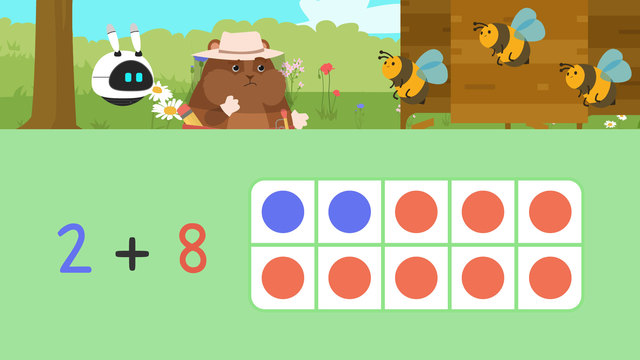 Information about the video Number Pairs to 10

In This Video on Number Pairs

Group Pairs of Successive Numbers that Add to 10

There are nine different pairs of numbers that add together to make ten. They are one plus nine, two plus eight, three plus seven, four plus six, five plus five, six plus four, seven plus three, eight plus two, and nine plus one!

Let’s imagine that one of the hives already has four bees inside! We can use a tens frame to set this up with four counters.

Remember, there are nine pairs of numbers that make ten. However, you only have to memorize five of them because some are the same reversed. For example, one plus nine is the same as nine plus one!

Below is a finding pairs of numbers that add to 10 worksheet.

More videos in Addition and Subtraction

Make a number line to subtract

Equations with Addition and Subtraction