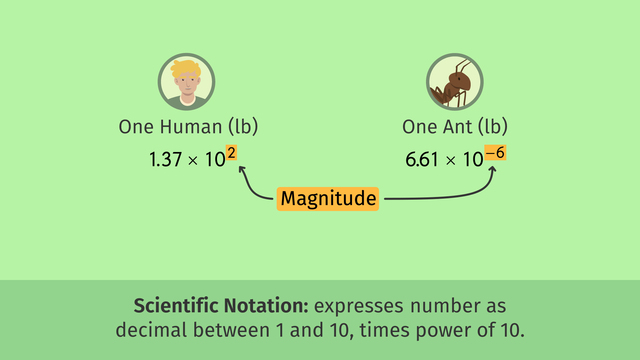 Basics on the topic Multiplying and Dividing Numbers in Scientific Notation

After this lesson you will be able to compare magnitudes using numbers in scientific notation.

Learn how to multiply and divide numbers in scientific notation, by helping David compare the weights of ants to humans!

This video includes key concepts, notation, and vocabulary such as: scientific notation (a finite decimal between 1 and 10, times a power of 10); finite decimal (a terminating decimal); leading digit (the leftmost digit); and order of magnitude (the exponent of the power of 10).

Before watching this video, you should already be familiar with estimating and comparing numbers in scientific notation, and comparing magnitudes of numbers.

After watching this video, you will be prepared to work with larger or smaller numbers in decimal form and scientific notation.

Common Core Standard(s) in focus: 8.EE.3, 8.EE.4 A video intended for math students in the 8th grades Recommended for students who are 13-14 years old

David finds an ant crawling on his hand. What a tiny creature, so light that David can barely feel him. David wonders, how much does this little ant weigh compared to himself? In order to comprehend the magnitude of the difference between David and the ant David will have to Multiply and Divide Numbers in Scientific Notation. David weighs about 137 pounds. But how many pounds is the ant? The ant is approximately point zero, zero, zero, zero, zero, six, six, one pounds. That's almost nothing! How can we possibly compare these numbers? Our first step is to put these numbers in scientific notation. Scientific notation expresses a number as a decimal between 1 and 10, times a power of 10. Let's start with David's weight, 137 pounds. The decimal point is here. If we move the decimal one digit to the left we have 13 point 7 times 10. 13.7 is not yet a decimal between 1 and 10, so we need to move the decimal one more digit to the left to get 1 point three seven times ten squared. This is David's weight expressed in scientific notation. Now the ant. We have to move the decimal point six digits to the right. So we have 6.61 times 10 to the negative 6th. What makes these numbers so different? David's weight is pretty big. Two is an expression of the magnitude of David's weight. The ant's weight is very small. Negative 6 is an expression of the magnitude of the ant's weight. Roughly how many times bigger is David compared to the ant? Taking David's magnitude and subtracting the ant's magnitude from it we can say that David is 8 orders of magnitude bigger than the ant. Wait, what's this? A super-colony! David just read about this species in biology, and he estimates that there must be about 150,000 ants living here! Let's put 150,000 in scientific notation. We move the decimal 5 places to the lef. so we have 1.5 times 10 to the 5th. How much do these ants weigh, all together? We know that one ant weighs 6 point six one, times 10 to the negative 6th. We want to multiply this time 1 point 5 times ten to the 5th ants. To multiply these numbers in scientific notation, we should first multiply the decimal parts. That's about 9 point nine one. The next step is to multiply the powers of 10. By the laws of exponents ten to the negative 6th times 10 to the 5th is 10 to the negative 1st so the colony weighs point nine nine one pounds. So the ant colony weighs almost a pound! Hm. David wonders what weighs more: all the ants in the world, or all the humans in the world? He read that there are 10 to the 17th ants on earth! And there are about 7 billion people on earth. Moving the decimal over to the left 9 places gives us 7 times 10 to the 9th people on earth. We want to multiply the weight of one ant by the number of all ants on Earth. Here, we only have to multiply the powers of 10. By the laws of exponents, 10 to the negative 6 times 10 to the 17th is 10 to the negative 6 plus 17 which is 10 to the 11th. This is the weight of all the ants on Earth. Davids's weight of 137 pounds is about average. So to calculate the weight of all the humans we can multiply Davids weight by the human population. We first need to multiply the decimals together. One point three seven times 7 is 9.59. Next the powers of ten. 10 squared times 10 to the 9th is 10 to the 11th. The magnitudes of the ants and the humans are equal! That tells us that the humans and the ants weigh roughly the same. But let's divide the weight of the humans by the weight of the ants to get a more precise comparison. 9.59 times 10 to the 11th, divided by 6.61 times 10 to the 11th. First, let's divide the decimals. 9.59 divided by 6.61 is about 1.45. Next, let's divide the powers of 10. The powers of 10 cancel. So all the humans weigh about 1.45 times as much as the ants! The humans are just barely winning the weight battle with the ants. Let's review. Converting to scientific notation involves moving the decimal point to the left or right, until we have a number between 1 and 10, times a power of 10. Like we did with David's weight. And like we did with the ant's weight. Comparing numbers in scientific notation involves comparing their orders of magnitude, as expressed by the exponents for each. To multiply or divide numbers in scientific notation, we perform our arithmetic with the decimals separate from our arithmetic with the powers of ten. Oh no! David's bigger than one ant but all the ants are a lot bigger than David!