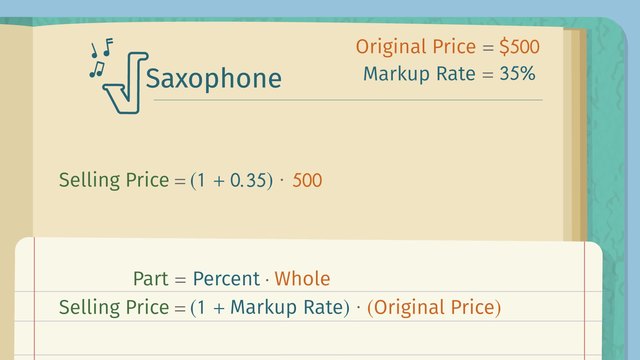 Basics on the topic Markup and Markdown Problems

After this lesson, you will be able to calculate markup and markdown problems using the formula, Selling Price=Percent x Original Price.

The lesson begins by teaching you about markups and markdowns. It leads you to calculating the selling price using the formula, Selling Price=Percent x Original Price. It concludes with teaching you how to apply an additional markup rate.

Learn about markups and markdowns by helping Marty find a selling price for his instruments!

Before watching this video, you should already be familiar with money, discounts/sales, percents and rates.

Common Core Standard(s) in focus: 7.RP.A.3, 7.EE.B.3 A video intended for math students in the 7th grade Recommended for students who are 12 - 13 years old

Marty is the owner of Marty's Magical Music where he sells vintage instruments at competitive prices. While cleaning his shop, Marty finds a couple of old instruments that were packed away and forgotten. The guitar looks like it's seen better days but the saxophone is signed by William Clinton! Marty already has more guitars for sale than he can count so he wants to unload this one as quickly as possible. But this signed saxophone is one-of-a-kind and very valuable! Since these aren't his typical products, how much should he sell them for? In order to set reasonable prices, Marty needs to know how to solve Markup and Markdown problems. But what are markups and markdowns? Let's take a closer look. The starting point is what we call the original price. From this, Marty can either increase the price or decrease the price. When he raises the price, the increase is called a markup. The amount of the markup can either be given as a dollar amount, like 80 dollars, or as a percent of the original price, such as 10 percent. If it's a percent, it's called the markup rate. After applying the markup, we get our selling price. Since the saxophone seems to be quite valuable, Marty will want to raise the price: a markup. When he lowers the price, the decrease is called a markdown. Again, this decrease can be a dollar amount or a percent. If it's a percent, it's called the markdown rate. After applying our markdown, we get the selling price, just like before. Since the guitar is a bit broken, Marty will want to lower the price: a markdown. Let's start with that old guitar. A guitar like this one usually sells for 200 dollars, so that would be the original price. Since the guitar only has 3 strings, Marty decides to markdown, or discount, the guitar by 25%. So what will the new price be? Finding an item's selling price after it's been marked down is just finding the PART that equals the PERCENT of the WHOLE original price. The SELLING price is a percent of the ORIGINAL price. In this case, the original price is 200 dollars. If the markdown is 25%, what percentage of 200 will the buyer pay for the guitar? The buyer pays 100 minus 25, or 75%. That's point 75. Before we calculate the selling price here, let's take a moment to notice the formula we used. The selling price is a percentage of the original price. That percentage is 100% minus the Markdown Rate. It's better to write the percentages as decimals: so 100% can be written as 1. Always remember to convert the Markdown Rate to a decimal. So what's the selling price of the guitar? 150 dollars. A cheap price for a definite fixer upper! Now it's time for Marty to set a price for the fine looking saxophone, signed by William Clinton! This kind of saxophone would normally be listed at 500 dollars: that's the original price. However, since it's autographed, Marty can apply a markUP rate of 35%. How can we adjust the markdown equation from before so we can use it to calculate a markup? Since we want to INCREASE the price, we have to add the markup rate to one instead of subtracting it like we did with the guitar The original price of this saxophone is $500 and the markup rate is 35%, or point 35.

That's means the selling price of this beautiful saxophone is $675. As Marty is polishing the sax, he notices that it's a very rare King Super 20 from 1946! For all super rare instruments like this, Marty adds an additional 20% markup. To calculate the new selling price, we want to add 20 percent to the current selling price. That means we have to markUP the price of 675 dollars by 20%. We use the same markup formula as before, but the original price is now the selling price. So our NEW selling price will be 1 plus point 20, times 675 which gives us a new selling price of 810 dollars. Pricey, but what a find! Now Marty just needs to display the sax prominently in his store so that his customers can appreciate it! Let's review the tools we used to help Marty markup the sax and markdown the guitar. The markdown rate is the percentage DECREASE of an original price. To calculate the Selling Price after a markdown we calculate the quantity 1 MINUS the markdown rate times the Original Price. The markup rate is the percentage INCREASE of an original price. To calculate the Selling Price after a markup... we calculate the quantity 1 PLUS the markup rate times the Original Price.... We can even markup or markup down a product that has already been marked up or marked down. In this case, the selling price we calculated is used as the original price in our markup or markdown formula. After Marty put the sax and guitar up for sale, blues legend Scratchy Joe Scranton randomly wanders into the store. He picks up the old guitar and starts to play... and boy it sounds magnificent!