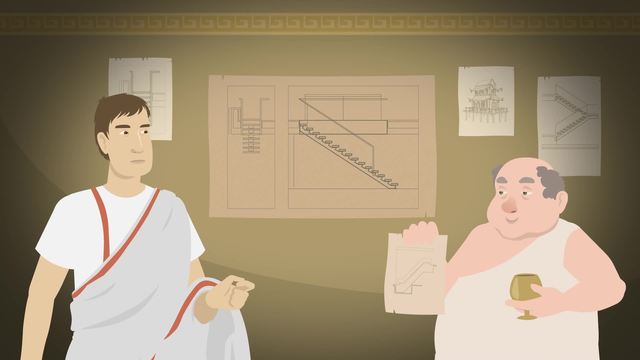 Basics on the topic Identifying Positive Proportional Relationships in Graphs

After this lesson, you will be able to identify the graph of a positive proportional relationship as a line with a positive slope, passing through the origin.

The video begins with a review of linear relationships and proportionality. It leads to identifying three characteristics of the graphs of positive proportional relationships, and applies them to three examples.

Learn about the graphs of positive proportional relationships by helping Balbus build a royal set of stairs for the Caesar!

This video includes key concepts, notation, and vocabulary such as: the characteristics of a positive proportional relationship (a straight line, going through the origin, with a positive slope); linear relationship (represented by a line on the coordinate plane, where the slope or rate of change always stays the same); positive slope (when x increases and goes the right, y increases and goes up); the constant of proportionality (in a proportional relationship, the constant which is equal to the slope of the line); and origin (the point (0,0) on the coordinate plane).

Before watching this video, you should already be familiar with proportional relationships and their characteristics.

After watching this video, you will be prepared to learn more about the constant of proportionality and how it relates to a unit rate.

Common Core Standard(s) in focus: 7.RP.2a A video intended for math students in the 7th grade Recommended for students who are 12-13 years old