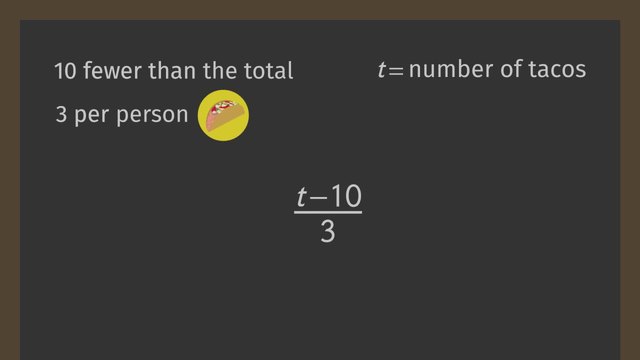 Information about the video How to Write Expressions

In order to write mathematical expressions it is important to be able to recognize keywords to help identify which operations, constants, variables, and so on need to be used. When perfected, this method can make it possible to easily translate word problems into corresponding math equations. Learn how to write expressions by finding out how Loco Mateo jumpstarts his catering business that features his signature Tacos El Fuego. Common Core Reference: CCSS.MATH.CONTENT.6.EE.A.2

Transcript How to Write Expressions

Loco Mateo is crazy for tacos, so he decides to start a catering service which will feature his signature creation: Tacos el Fuego. Because he knows his tacos are so insanely delicious, he’s absolutely certain that his new business is going to be a success. So, he needs to write up a business plan to make sure he’s ready for all the HUGE orders he’s definitely going to get once he launches. To help him prepare for his inevitable financial success, Mateo is going to have to enlist the help of some basic algebraic expressions. Mateo’s plan is to cater to weddings, funerals, family reunions..anywhere there is a big group of people fiending for tacos. Since each group is going to be different, he needs to come up with an expression to represent how much he'll charge for each catering order, based on the number of tacos sold. Mateo decides to charge $2.50 for each Taco el Fuego plus, he’s going to charge a $200 service fee for his impeccable taco servicing skills. By focusing in on the keywords, we can turn Mateo's business plan into an algebraic expression. Since each taco costs $2.50, we should multiply 2.50 by 't', or the number of tacos sold, to get the total amount of money Mateo can earn by selling tacos. The variable 't' represents the number of tacos Mateo sells. When multiplying by a variable, you can either use a multiplication sign or just put the number right next to the variable. Finally, we know that the keyword "plus" indicates addition, so we add a plus 200 to complete the expression. Next, Mateo is going to need to figure out how many people he can feed with each batch of tacos he makes. Because he wants to keep his business exclusive, he decides to limit the number of tacos to three per person. But, Mateo is also not the most efficient chef. Every time he prepares a batch of tacos, he always burns or breaks some of them, so he ends up with 10 fewer than the total number of tacos in the batch. Let's use this information to write an expression. We knows that Mateo will end up with 10 fewer tacos than the total number of tacos he makes. We don't know how many the total will be, so we can use the variable 't' to stand for the total number of tacos. The words "fewer than" tell us that we are going to need to subtract 10 from the total, 't'. We also know that he will serve three tacos per person. The keyword "per" tells that we need to set up a division problem. So we take the total number of tacos remaining after the 10 misfires... Then divide that all by three. There! Now when we know the number of tacos, 't', we can use this expression to figure out how many people Mateo can feed! Now that he’s got a basic business model in place, Mateo just KNOWS that stocks in his company are going to soar! Right now, he figures that it’s worth about $10,000 but if everything goes according to plan, his company will double in value every week. How can we use this information to come up with an expression? Let's start with the initial value of the company, $10,000. Next, we have the keywords "double each week", which means we're going to do repeated multiplication by 2 every week. Let's draw up a quick table. At the end of week one, we know the company will be worth $10,000 x 2, or $20,000. At the end of week two, it will be worth $10,000 x 2 x 2, or $40,000. At the end of week 3, it will be worth $10,000 x 2 x 2 x 2, or $80,000. Do you notice a pattern here? Each of these expressions can be rewritten using exponents. $10,000 x 2 can be written as $10,000 x 2 to the first power. $10,000 x 2 x 2 can be written as $10,000 x 2 to the second power. Similarly, $10,000 x 2 x 2 x 2 can be written as $10 x 2 to the third power. Using this pattern, we can calculate how crazy rich Mateo’s going to be on week w, because we know that we'll have to multiply $10,000 by 2, "w" times! We can write this as the expression, $10,000 x 2 to the 'w' power! It looks like Loco Mateo has just finished up a batch of Tacos el Fuego in time to fill his first order! But where are all of his customers? I guess that’s why they call him Loco!

How to Write Expressions Exercise

Would you like to practice what you’ve just learned? Practice problems for this video How to Write Expressions help you practice and recap your knowledge.
More videos in Expressing Operations in Algebraic Form

How to Read Complex Expressions