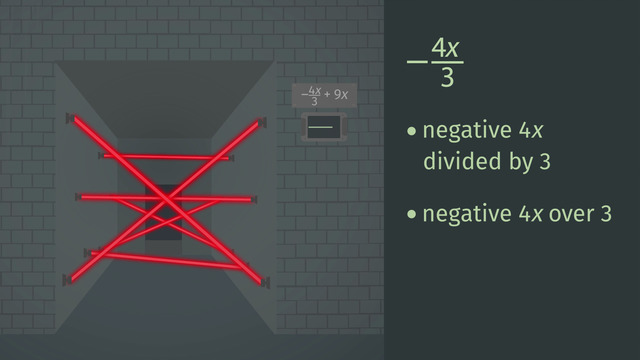 Information about the video How to Read Basic Expressions

Numerical or arithmetic expressions are the first mathematical sentences one encounters in grade school. We understand operations written in number form and can read them orally. But what if symbols start replacing numbers to represent unknown quantities? We need to know then how to read these kinds of basic expressions as well. In expressions, letters are used to represent quantities and can also be read as such. We then know how to read every element of an expression, so we just have to be mindful of these three basic rules or guidelines in reading basic expressions: read from left to right, pay attention to positive and negative signs, and, when reading fractions, read from top to bottom (numerator first over the denominator). The ability to read basic expressions is a good start to better understand, recognize, and write more complicated expressions, gaining more fluency in the language of mathematics. Learn more about reading basic expressions by helping Lucky escape from hacker prison. Common Core Reference: CCSS.MATH.CONTENT.6.EE.A.2

Transcript How to Read Basic Expressions

Meet Lucky. While on a mission, a careless mistake led to his capture by a rival hacker. I know, I know, Lucky's not lucky. Luckily for Lucky, the rival hackers kinda forgot to lock the door. Lucky takes a quick peek around and, spotting no guards, makes a run for the exit. However, this dusty labyrinth is lousy with booby traps. The way out can be reached by correctly reading the expression above each door. To find the one and only escape route, Lucky must know how to read basic math expressions.

Lucky confidently reads the equation as 'x' over 2. The door opened! Thankfully, it wasn't the trap door. Lucky doesn't want to become alligator food. Lucky was able to pass through the first few doors with no problems. But there's one door remaining. It's the toughest one yet!

Positive expressions are pretty straightforward, but what if the first term is negative? Lucky can see freedom! And a web of lasers in the hallway - no worries! Math expressions, just like English, are read left-to-right. So, we start with the fraction. The fraction is negative, so we must state this first. Then, we have to read the numerator before the denominator. Remember, it's division, so you get to choose how you read it!

The next operater from left to right is an addition sign. The term that follows can be read as 9x. Putting this all together, Lucky enunciates each word - negative 4x over 3 plus 9x.

When reading basic math expressions, it's important to remember to read from left to right, pay attention to positive and negative, and read fractions from top to bottom.

Back to Lucky. After reading the last expression. Lucky hears a noise and all the lasers are deactivated. Just Lucky's luck, he's stepped on a twig, and here come the bad guys!

How to Read Basic Expressions Exercise

Would you like to practice what you’ve just learned? Practice problems for this video How to Read Basic Expressions help you practice and recap your knowledge.
More videos in Expressing Operations in Algebraic Form

How to Read Complex Expressions