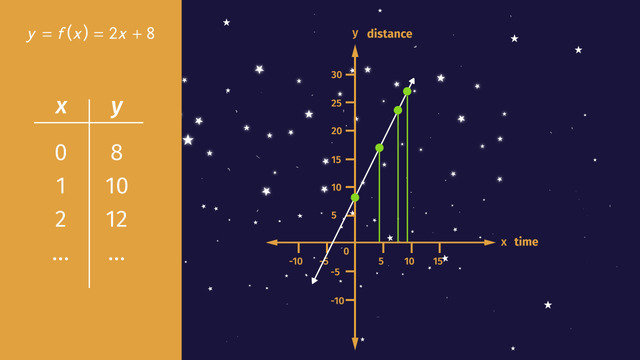 Information about the video Graphing Functions

Graphing functions is pretty much the same as graphing equations, with the symbol f(x) being a fancy way of writing y. To graph a function f(x), follow the following steps:

Stephanie Gawking is a math enthusiast, and her hobby is astronomy. From her backyard, she gazes through her telescope and dreams of discovering a new celestial body.

She sees a shooting star - which is a small, fast meteor. Although she knows the average speed of a shooting star is 30,000 miles per hour, she wonders about its path and how far it'll travel in a given amount of time.

What is a function?

To show the relationship between distance and time, we can look at a graph; the path of the star MAY be the graph of a function, but how do we know for sure?

A function is a special relationship between two variables; in this case, the variables are the distance and the time. For each minute that passes, the star travels to a new location in the sky. If the graph of the star's path is a function, then for every input, time, there is a unique output, the location or the distance traveled. Let’s take a look at the function f(x) = 2x + 8. Notice that we used the function notation, f(x), this is just a fancy way of representing 'y'.

Okay, let’s graph the function. It’s already written in slope-intercept form, y = mx + b. The y-intercept is equal to 8, and the slope, or rise over run, is equal to 2.

Let’s graph y = x2. To do this, we can create a function table and calculate a few points, then graph. If x = -2, then y = 4. If x = -1, y = 1, and so on. Notice the shape of this function. This distinctive u-shape is called a parabola. When you have a quadratic equation, the graph is always a parabola. How do we know if a quadratic equation is a function? For each x, there is only one y, and the graph passes the vertical line test.

Looking through her telescope, Stephanie sees a constellation. It’s so curvy; is it a function? Let’s use the vertical line test to see if it is. Oh look! It passes the test! So this graph is also a function - for each input, 'x', there is one output, 'y'. Here’s another awesome constellation, but does its graph form a function? Because the graph passes the vertical line test, it sure does!

And, what about this one? It’s u-shaped, but it’s turned sideways. It fails the vertical line test, so no, it’s not a function. For each input, there is more than one output. Whoa nelly! This one looks like a circle. Is it a function? It fails the test, so no way.

Stephanie adjusts her telescope. Holy moly! Stop the presses! What's that? She thinks she's finally discovered a new celestial body. It’s a dream come true. Wait, is that a firefly?

Would you like to practice what you’ve just learned? Practice problems for this video Graphing Functions help you practice and recap your knowledge.
More videos in Functions and Relations