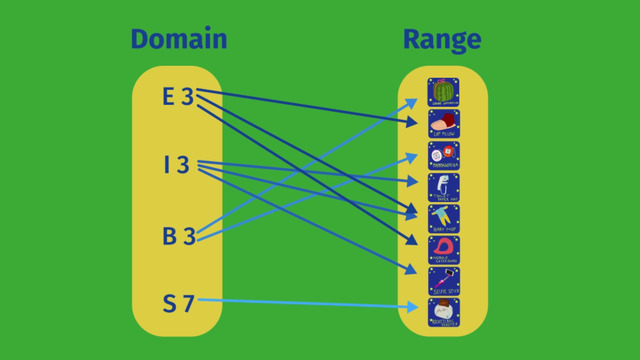 Basics on the topic What is a Function? The Difference between Functions and Relations

A relation is a way of expressing a connection or relationship between any two pieces of information.

For example, each person is in the following table is paired with a number representing his or her height:

Remember that all functions are relations, but not all relations are functions. For instance, matching a person’s age with their height does not give a function: Say Claudia and Gilbert are both 15. In this case, 15 would get paired with both 165 and 204, meaning that every age is not paired with exactly one height.

Understand the concept of a function and use function notation. CCSS.MATH.CONTENT.HSF.IF.A.1

Transcript What is a Function? The Difference between Functions and Relations

Herman remembers that f(x) is math code for function notation and that the mark on the other vending machine is called a relation mapping diagram. What do functions and relations have to do with vending machines? Herman decides to go to the relation vending machine. He does feel lucky. Herman puts in 100 ¥. He chooses the Lap Pillow and enters E3 in the keypad.
What's happening? Why is the vending machine giving him a Noodle Eating Guard? that's also labeled E3? Upon closer inspection, Herman notices that there's something curious about this particular vending machine. There are several items that are labeled E3, there are also a few items labeled I3.

And look at that! S7 is the only item with that label. Herman decides to get a Rocketcroc Toaster. Again, he puts in money and enters in S7. Perfect! Herman decides to give the other items another try. After all, he does feel lucky! Once again, Herman puts in 100 ¥, chooses an item and enters the number in the keypad. This time, he chooses B3 since there are only two items labeled B3. Herman gets the square watermelon. Nice, but he wanted a Mommagotcha. So he tries again.

This time, he gets the Mommagotcha! But wait he didn't do anything differently, but got two different items. Herman thinks back to math class and remembers his teacher telling him that relations were when each element in the domain is related to one or more items in the range. When he enters in the code for an item, any one of the items with the same label could come out. With relations, an element in the domain of inputs can be related to one or more items in the range of outputs. Enough of this nonsense. Herman is pressed for time and he can't hope for a cool souvenir.

Herman decides to use the vending machine labeled with the function notation. Surely this will act like it should. Herman remembers that the function notation version of y = x is f(x) = x. And, although the name of this function is 'f', some other common letters used in function notation are 'g' or 'h', these would be read 'g' of 'x' and 'h' of 'x', respectively.
But no matter how a function is written, it has three main parts. First there is an input, 'x', that is chosen out of a set of starting points called the domain. Then, the function changes each input into a unique output, f(x), the artist formerly known as 'y'. The outputs create a set called the range.

Herman's sure he can get what he wants. He has his eye on AR2, which is the selfie stick. This'll make the perfect gift for his girlfriend! You've gotta be kidding the item's not coming out!
Herman's got an idea...Well, that didn't work. What's this? Herman catches a glimpse of a tool machine...Maybe...just maybe...NO...no...this is definitely worse.

What is a Function? The Difference between Functions and Relations exercise