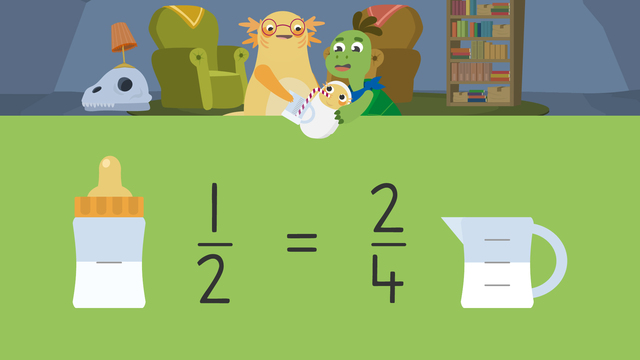 Information about the video Equivalent Fractions

Axel and Tank are babysitting Axel’s little brother, Odell. Mom left very strict instructions for them to follow. But, she accidentally took the diaper bag and the only bottles. The only containers left in the house have different measurements on them! In this equivalent fractions video for kids, Axel and Tank learn about the meaning of equivalent fractions and how to determine if fractions are equivalent in order to feed Baby Odell correctly.

A simple definition for equivalent fractions is as follows:

Equivalent fractions are fractions that are from the same whole with numerators and denominators different from one another but identical in value.

How Can You Tell if Two Fractions are Equivalent?

What Does it Mean When Two Fractions are Equivalent?

How to Work Out Equivalent Fractions?

Then, represent the second fraction on a bar of identical size by shading it to represent two-fourths.

More videos in Fractions and Decimals

Fractions on a Number Line

Multiplying a Fraction by a Whole Number

Fractions as a Multiple of Unit Fractions