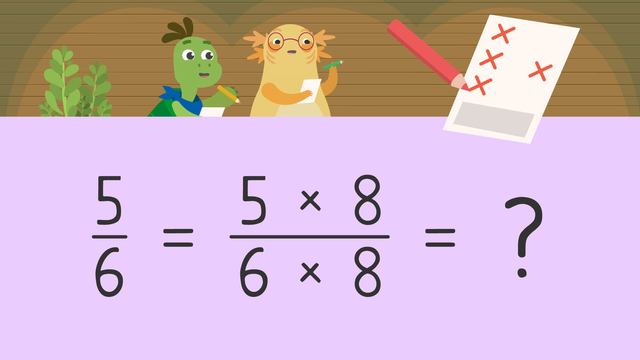 Mathematically, we can show how to generate, or create, equivalent fractions through a multiplication expression.

In this formula, the a over b represents our fraction. We use the n to stand for the number we are going to multiply both the numerator and denominator by. The equal sign shows the two sides of this expression are equivalent.

One-half and two-fourths are an example of equivalent fractions.

In one half, the whole is divided into two larger parts and one of the halves is shaded in. To make two-fourths, we would multiply the numerator and denominator by two. The whole is now grouped into four parts and two parts are shaded in. The size of these parts differs, but the size of the whole remains the same and therefore so does the value of the fraction.

“B(....) TWO-THIRDS!” It’s fraction night down at the bingo hall and Axel and Tank are excited to try to win the night’s top prize… which is a trip for two to Submersive Studios! In order to be the first to fill their bingo card, they need to find… Equivalent Fractions. Equivalent fractions are fractions that have the same value but have different numbers in the numerators and denominators. They are created by breaking the whole into smaller parts and having a greater number of pieces. We increase the number of parts in the fraction by multiplying the numerator and denominator by the same factor. Mathematically, we can show how to generate, or create, equivalent fractions through a multiplication expression. In this formula, the over represents our fraction. We use the