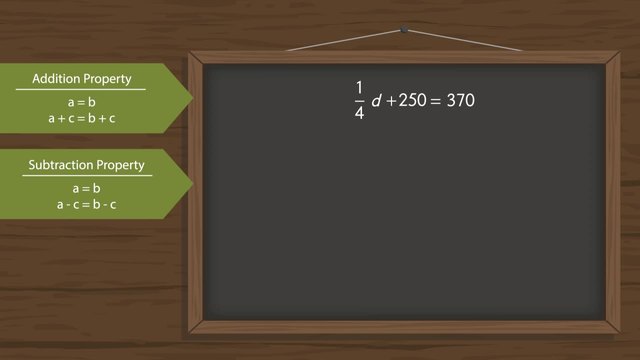 Information about the video Applying Algebraic Properties of Equality

After this lesson, you will be able to rewrite and modify equations by applying the different properties of equality.

Learn about rewriting an equation using the different properties of equality by helping the flobbit Wilbo compute for the length of time that he shall spend on napping so he could complete all his tasks for the day!

Before watching this video, you should already be familiar with variables, like terms, equations, and writing an equation to represent a word problem.

After watching this video, you will be prepared to learn how to solve more word problems involving equations such as distance, age, and unknown angle word problems algebraically.

Common Core Standard(s) in focus: 7.EE.B.3 and 7.EE.B.4 A video intended for math students in the 7th grade Recommended for students who are 12-13 years old

In this house, there lives a flobbit named Wilbo. He's still sleeping, as flobbits tend to do but it’s time to get up now ‘cause there's a lot to do. Today, Wilbo has to take care of his pumpkins, eat delicious mushrooms with his friends and go hiking in the Flobbit-mountains. Sounds like a long day. To figure out how long, we're going to need to Apply Algebraic Properties of Equality. Wilbo plans to spend 210 minutes taking care of his pumpkins and he needs 40 minutes for lunch. Wilbo plans to go hiking for one fourth of the day and the rest of the day if there is time left, he wants to take a nap. For taking care of the pumpkins and going hiking, he plans to spend a total time of 330 minutes. So how long, in minutes, will his day be? How can we solve this problem using math? Of course, first we have to set up the equation we want to solve. Let's substitute one quarter of a day for hiking and let's let 'd' stand for the number of minutes in a Flobbit day we can also substitute 210 for the time it takes Wilbo to care for his pumpkin patch. Oops! We almost forgot to give Wilbo time for lunch! We have to add 40 minutes to the equation, but where? Since this is an equation, you have to add 40 on both sides of the equation to keep it equal. This is the Addition Property for equations. It says that, if you add a value to one side of the equation, you also have to add it to the other side to keep the equation equal. The new equation, including time for Wilbo's lunch, is: one fourth 'd' plus 250 equals 370. Let's review the subtraction property. It's like the addition property, but involves subtraction instead. If you subtract something from one side of the equation, you must subtract the same amount from the other side to keep the equation equal. Here, we apply the subtraction property to isolate the variable 'd'. If a variable is multiplied by a fraction, that's the same as multiplying the variable by the numerator and dividing by the denominator. When we see something like this, we can simply multiply by the reciprocal of the fraction to isolate the variable. In this case, we multiply both sides by 4 over 1. The Associative Property of multiplication says: if you're multiplying several numbers together, the order in which the numbers are grouped does not matter. In case you were wondering, there's an associative property of addition as well. Getting back to our equation, Wilbo's work day is 480 minutes, or 8 hours long. Since there are 60 minutes in each hour, we can convert 480 minutes to hours by multiplying our total by the number of minutes per hour to find out how long Wilbo has to work. So, how much time is left for Wilbo's all-important nap? Let's see what we've got: Wilbo wants his day, which is 480 minutes long, to be split up between 4 very important tasks. He wants to take care of his pumpkins, eat lunch, go hiking, and then take a nap. If we let 'p' stand for Wilbo's pumpkin care time and 'l' stand for lunch 'h' for hiking and 'n' for time spent napping we can rewrite the equation like this: But does the order in which Wilbo completes his tasks matter? Couldn't he go hiking, take a nap, eat lunch, and then care for his pumpkins and it would take the same time? As long as the signs remain the same, the order in which you add does not matter. This is called the Commutative Property of Addition. Commute just means 'to move'. Your parents might commute to work in the morning... Back to our problem. Before, we figured out that Wilbo has 370 minutes planned for pumpkin patch maintenance, lunch, and hiking. Replacing this in our equation, we can see this problem's looking easier already! Notice we have addition with 'n'. If we have addition and want to isolate the variable, we need to use its opposite operation, subtraction, on both sides of the equal sign. Subtracting the two numbers on the right side of the equation we see that Wilbo can take a nap for 110 minutes.

Would you like to practice what you’ve just learned? Practice problems for this video Applying Algebraic Properties of Equality help you practice and recap your knowledge.
More videos in Solve Problems Using Expressions, Equations, and Inequalities