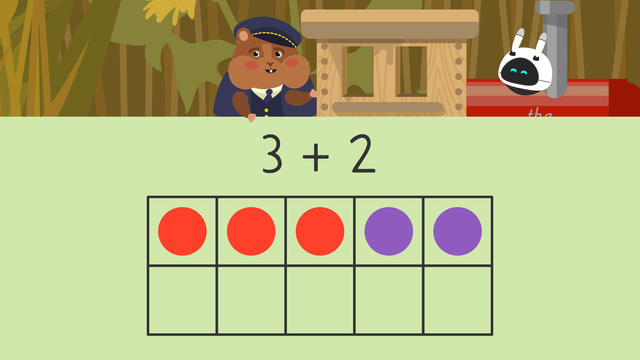 Basics on the topic Using Ten Frames to Add

In this Video on Addition with Ten Frames

The Hamtrack Express is almost ready for its first passengers. However, Conductor Squeaks just has to figure out how many train cars to add. In this video on ten frames addition, he determines the right number by using ten frames addition to 20. But where has Imani been this whole time?

How to Use Ten Frames in Addition

Ten frames are charts with two equal rows of five. They have ten spaces in total. When we place counters in those spaces, we can see different numbers within ten. For example, the number six has six counters in a ten frame. Each box has one marker, or counter, and there are six in all.

If we fill up the entire ten frame, it means we have a set of ten! When we see a full ten frame, we know the amount is ten right away without having to count!

We can use a ten frame horizontally or vertically. It works the same both ways because the amount of spaces does not change.

Why Use Ten Frames in Addition?

Modeling addition using a ten frame helps children visualize the numbers you are adding together. Since each number is represented on the ten frame, it allows children to count out their answers.

Let’s use the example three plus two. Start by showing the first number, three, in counters on the ten frame.

Then, show the second number, two, on the ten frame using counters again.

Now, count ALL the filled spaces on the ten frame.There are five counters in all, so three train cars plus two train cars equals five train cars.

Have you practiced yet? On this website, you can also find ten frame addition worksheets and exercises.

Would you like to apply the knowledge you’ve learned? You can review and practice it with the tasks for the video Using Ten Frames to Add.
More videos for the topic Addition to 20

Finding the Unknown Number (in Addition)