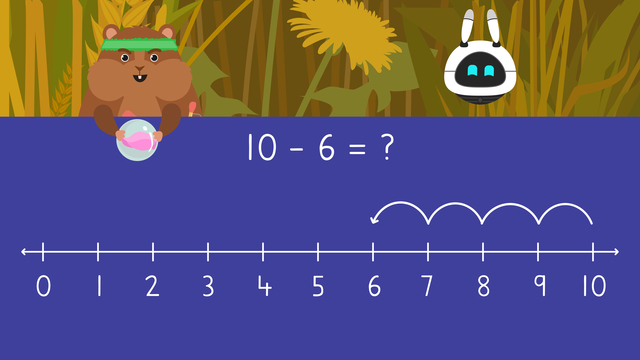 Basics on the topic Using Number Lines to Subtract

In this video on 1st Grade Subtraction with Number Lines

Mr. Squeaks built a bowling alley so he and Imani could play a game. Mr. Squeaks starts by rolling the ball down the lane at the ten pins. He knocks down six. He wants to know how many pins are still standing, but isn’t sure how to figure it out. In this video, Mr. Squeaks and Imani learns all about using a number line to subtract.

Closed number lines help us see the numbers as we take things away, or subtract. They already have numbers written out for us to use. We always move to the left, or backward, when we subtract on a number line. We subtract with hops on a line to show our work.

Let's practice with the example eighteen minus two. Find the first number, eighteen, and mark it on the number line.

Then, look at the second number, two, and count two spaces to the left, or backward. After counting, we landed on sixteen.

So sixteen is our answer! We write sixteen next to the equal sign. Eighteen minus two equals sixteen!

Would you like to apply the knowledge you’ve learned? You can review and practice it with the tasks for the video Using Number Lines to Subtract.
More videos for the topic Subtraction to 20