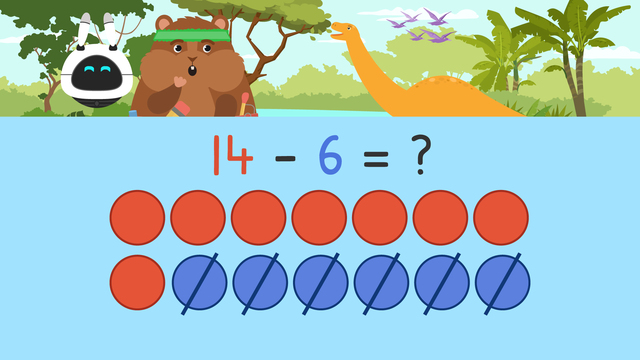 Basics on the topic Subtraction Word Problems up to Twenty

Mr. Squeaks and Imani are in the Land of Dinosaurs and are observing them from a safe distance using binoculars. They notice a brontosaurus eating leaves on a branch and want to know how many leaves are left. Let’s help them solve by learning how to do subtraction.

Now that we've drawn the circles, let's subtract by crossing SIX off. How many circles are left?

Eight! Which means fourteen minus six is eight. Now that we’ve learned the subtraction meaning and 2 digit subtraction, let’s review!

When we want to find out how many are left, we can use subtraction. First, write a number sentence. Second, draw pictures of how many we are starting with to help us subtract. Then, subtract by crossing off. Last, count how many are left.

Would you like to apply the knowledge you’ve learned? You can review and practice it with the tasks for the video Subtraction Word Problems up to Twenty.
More videos for the topic Subtraction to 20