The Slope of the Line y=mx+b 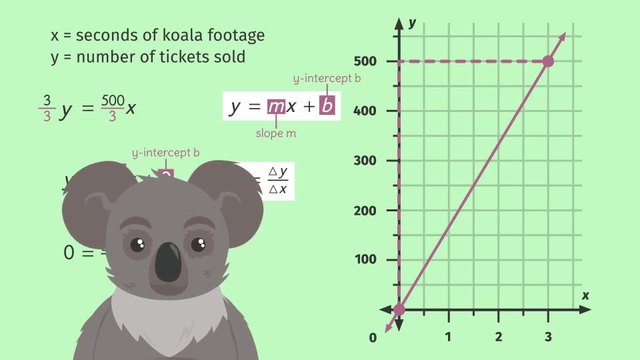 After this lesson, you will be able to graph linear equations in slope-intercept form.

Learn about slope of the line by seeing how Furious Films plan and shoot for their next blockbuster movie.

Before watching this video, you should already be familiar with linear equations, properties of equality, and solving equations by isolating a variable.

After watching this video, you will be prepared to solve real world problems that involve constant rates, which can be considered as the slope of a line when the problem is represented by an equation.

Transcript The Slope of the Line y=mx+b

There's trouble on the set of FISTS OF DANGER, the new, big-budget action movie from Furious Films. The movie is missing something...but what? According to the latest research, adding scenes with adorable animals to any movie will increase ticket sales! This may sound like a weird idea for an action film but with some cute animals and the slope of the line y = mx + b, we could save this movie yet! Studies show that for each second of baby koala footage featured in a film, ticket sales go up.

This linear relationship is expressed in the following equation: 3y equals 500x where 'x' represents seconds of koala footage and 'y' is the number of tickets sold. To better understand this equation, let’s rewrite it using slope-intercept form, or 'y equals mx + b'. Using this form, it will be easier for us to understand how 'x' and 'y' change in relation to each other. To get our equation in this form, all we have to do is isolate the variable, 'y'. To get 'y' by itself, we can divide both sides of the equation by 3, thanks to the division property of equality. Great! Now our equation is in slope-intercept form, so we can easily identify the slope, 'm', which will always be the coefficient of 'x'. Here, the slope 'm' equals 500 over 3, or 500 thirds. Remember that slope represents the change in 'y' over the change in 'x'.So that means, for every 3 seconds of footage of baby koalas, we sell 500 more tickets.

What other animals can we get on board? Research also shows that having a miniature teacup pig on screen can boost ticket sales. This can be represented by using the equation, 120x minus 4y equals 20 where 'x' represents seconds of pig footage and 'y' is the number of tickets sold. Let's transform this equation into 'y equals mx + b' so we can figure out how the teacup pigs are going to affect ticket sales. To get 'y' alone, subtract 120x from both sides and divide every term in the equation by negative 4, to cancel out the coefficient of 'y'. Finally, we can rearrange the terms on the right side of the equation so it matches the more familiar form of 'y equals mx plus b' that we recognize. Now we can easily identify the slope, 'm', as the coefficient of 'x'. The slope tells us that for every second of teacup pig footage, we sell 30 more tickets. We can also easily identify 'b', or the y-intercept, at (0, -5). To sketch this graph, let's start with the point we just found. Now use what we know about the slope and go up 30, to the right 1, and draw a line through these points. Those pigs have got a future in Hollywood!

But not all animals are so good for the movies. The notorious honey badger has a crippling effect on ticket sales. Let’s take a look at this formula. 3x plus 5y equals 10 where 'x' represents seconds of honey badger footage and 'y' is the number of tickets sold. Let’s isolate the variable, 'y'. Start by subtracting 3x from both sides and divide all the terms in the equation by 5. Much better! The slope in this equation is negative 3 over 5. This means for every 5 seconds of honey badger screen time, the movie actually sells 3 fewer tickets. We can also easily identify the y-intercept, or 'b', at (0, 2). So how do we graph this line? Start with a point you know, like the y-intercept at (0, 2). Because the slope is negative, we then go down 3, to the right 5. Now we draw a line through these points man those badgers are really dragging sales down!

To review: We can write linear equations using the form 'y = mx + b'. This is known as Slope-Intercept Form. In this form, 'm' represents the slope the line, or change in 'y' over change in 'x' and 'b' is the y-intercept, or where the line crosses the y-axis.

Using the market research, the studio executives have gone ahead and reshot their film using a new title... …TROUBLE CUTIES?´Man, Hollywood really has changed these cute little guys...

The Slope of the Line y=mx+b exercise

Would you like to apply the knowledge you’ve learned? You can review and practice it with the tasks for the video The Slope of the Line y=mx+b.
More videos for the topic Slope and Equations of Lines

Computing the Slope of a Line

The Slope of the Line y=mx+b

One Point, One Slope, One Line